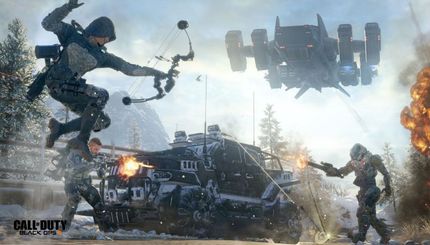 4.8
Treyarch will be returning to the Call of Duty fold later this year with Call of Duty: Black Ops 3 in November.

While some of its decisions have irked fans (just look at a few negative reactions to the new Zombies mode), it’s pretty much a given that Black Ops 3 will be a major success. The question is: Did Treyarch miss out on having the game only for current gen hardware?

There are arguments both for and against focusing on new hardware, as Treyarch director of brand development Jay Puryear told Gaming Bolt. When asked about there being any specific reason why a previous gen release was happening, Puryear said, “Is there a reason?! We’ve got great fans. Call of Duty experiences are always about the community and fans and we want to make sure that everybody who wants to play Black Ops III can.”

Will the hype for Black Ops 3 be justified at launch, especially considering previous entries like Advanced Warfare didn’t quite set the world on fire? “Of course! Right? I mean look at it, the team has worked 3 years to pour their hearts and soul to deliver a product that will push on single-player campaign with four-player co-op on next-gen. We’re really pushing the system in the machine and hardware.

“If you look at all the innovations that we’re doing on multiplayer and really adding this combat loop, progression system, specialists characters. So, there is just so much content on the disc and then when we roll out our zombies I think you’ll see that we’ve got 3 games in 1. So, as far as the content and the experience we’ll get out of this, we think is absolutely by far the best.”
Call of Duty: Black Ops 3 is out on Xbox One, Xbox 360, PS3, PS4 and PC on November 6th.

I don't care about anything they say I hope the game is good.

Anything will be better than AW .. Game was a shit show from "Day Zero"

does it really matter though its just a game

As long as zombies is good eh!

Is it fair to say the next COD will be XB1/PS4 exclusive, suppose we will have to wait and see.

What they actually said was "hurr durr we get more $$$ if it's on all consoles" don't tryto sugar coat it treyarch everyone knows...

Lets just hope they do a good job with zombies and release the tools to make custom maps again.

We nwant more money*** they mean