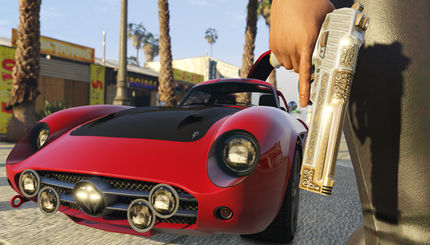 4.7
Rockstar has said that it has new content planned for GTA Online for those that want to spend their hard-earned Heists money.

The developer has teased a new car for the game and what could be a new or upgraded pistol.

The pistol itself looks like a modified .50 from GTA 5. The sports car has gullwing doors, and at least two familiar modifications – the low rally lights and carbon hood – both of which are currently available from Los Santos Customs.

“We are also working on another update coming soon that will feature some very cool new toys for you to enjoy and flaunt with your ill-gotten gains,” said Rockstar. “For now, the screenshot above provides just a glimpse.”

The developer also said that players shouldn’t expect any new Heists soon, although more DLC is on the way for GTA Online.

“For those asking for more Heists, please understand that Grand Theft Auto Online Heists were a tremendous undertaking so it’s not the sort of thing where we can easily create and publish additional Heists like other Job modes and missions. ”

“We are, however, working on other cool updates for GTA Online that you can expect over the coming months.”

Last night Rockstar confirmed that those using single-player mods in the PC version of the game are not being banned, but the mods themselves could be causing some issues with the game.

The video you have requested should be available shortly.

This looks very nice. I love all the new content we keep getting for GTA V, especially the vehicles but that pistol also looks hella badass. Maybe it'll mean more skins for weapons with more detail?

This looks like its going to add more to the game.

Looks good but they need to add more hiests

This looks like its going to add more to the game.

FriskyPanda How about fixing the terrible servers? I no longer play online or even try because rockstar can't fix their shit

There are no server issues, its probably just your internet.

I would love to use that gun.

I always wait around for new and improved updates for GTA. And this one would be a good one i wish they'd add more customization for cars such as body kits and things

Awesome! I cannot wait for this

I am looking forward to more explosives in GTAV. The proximity mine was a great addition in my opinion.