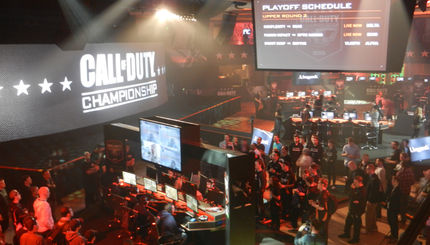 4.8
Once again, the top Call of Duty players across the globe will battle for a $1 million prize pool with the return of the third annual Call of Duty Championship this march.

Presented by Xbox along with Major League Gaming, publisher Activision and developer Sledgehammer Games will bring the championship to Los Angeles on March 27 where 32 teams will compete in Call of Duty: Advanced Warfare.

The tournament will run until March 29 with semifinal and final matches airing on Xbox Live during the last day of the championship.

Teams will hail from North America, South America, Europe, Asia, and Australia with online qualifying matches beginning later this month and next month on Xbox One. Regional finals will take place between February and early March in the US, UK, Australia, and Brazil and will be aired on MLG.tv as well as other broadcasters.

Registration and timing details can be found on MLG’s official website.

"Call of Duty Championship Returns This March With A $1 Million Pool" :: Login/Create an Account :: 55 comments

Lets all be honest who would go buy something really unneeded if you won this? Like a sports car.. lol

Where do i sign up for this? LOL 1 million. Dang its that serious?

Monster-Munch This will be interesting to see but that is a lot of money if you win would keep me going for at least a few years haha.

A few years? More like your whole life lol.

It's a shame the game sucks...

TTG_Vape A 1mil pool? Wow... Okay I need to step up my game, become pro, get into games like this, and then make profitz. I say it'll take me a week lol (I wish...)

Yea but you split it with your team. Pro players don't make there big money at tournaments unless you win obviously but I would imagine they make there money from youtube and such.

These events were always fun to watch. I find Advanced Warfare pretty unpredictable with all the halo hopping around back and fourth so it should be amazing to watch live with all the pro players involved. The events get better by the year so it'll be great.

Sims4 This should be fun hopefully better than last year

I find it will be better this year since the game is better.

This should be fun hopefully better than last year