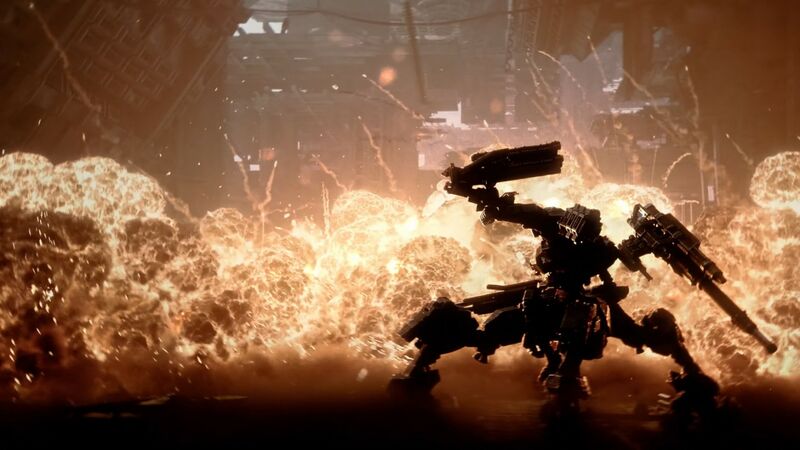 3.7
Fresh off of revealing Armored Core 6: Fires of Rubicon at The Game Awards 2022, FromSoftware president Hidetaka Miyazaki and director Masaru Yamamura provided several new details to IGN. They confirmed the lack of an open world or connection to previous titles. Furthermore, though it would have challenging mech fights, the difficulty could vary based on missions, enemy types, and how one assembles their mech.

So it’s perhaps unsurprising to learn that the game isn’t aiming for a Soulsborne style of gameplay. “No, we’ve not been making a conscious effort to try to direct it towards more Soulsborne-type gameplay. First of all, let me just make that clear,” said Miyazaki.

“The essential direction of [Armored Core 6] was to go back and take a good look at the core concept of Armored Core and what made that series special. So we wanted to take the assembly aspect, assembling and customizing your mech — your AC — and then being able to exact a high level of control over the assembled mech. So we wanted to take those two core concepts and reexamine those in our modern environment.

“And, of course, what that means is taking our know-how and experiences from game development in recent years, and applying that knowledge to the development of [Armored Core 6], and reexamining it together with those core concepts of Armored Core. So the real impetus for this project, I think, or at least one of the appeals for me comes from that aspect of assembly, and being able to freely assemble and customize the mech, I think is what we highly focus on in Armored Core.

“And having mechs or mecha as a theme, it’s really about that high level of freedom that adjusting each part gives, and how that affects the gameplay and the properties of your mech actually in combat. We think it’s a little bit more liberating than, say, just swapping out armor or equipment. There’s a much higher degree of freedom here, and being able to see these effects both in-game, as part of the world-building, and as part of your player choices, we feel like this is a very big part of what makes Armored Core special.”

Yamamura previously contrasted the gameplay to Sekiro: Shadows Die Twice, with players having more customization, as opposed to sticking to one style. He further notes that despite “no elements directly referring to Sekiro,” “I feel both titles share the same essence of battles such as aggressive, speed change and action-oriented fighting. For this title, by continuing to attack even the strongest enemy, the force of impact can break the enemy’s posture and inflict a large amount of damage – a critical hit.

“This is the starting point for the slow and fast speed change of the battle, and when combined with long-range firefighting and close-range melee combat, the enemy and his machine engage each other violently, creating a more aggressive and dynamic battle that only mechas can engage in.”

It sounds vaguely like a counter mechanic, but Yamamura clarified, “Rather than calling it a counter mechanic, what we want to stress is this reason to continue attacking and to continue on the offensive. You want to create chances for yourself in combat and turn the battle to the player’s advantage. So what we feel is this is going to create a nice back-and-forth flow in battles in Armored Core 6, and create this nice mix of offensive and defensive play… but we want the player to feel like they’re constantly able to pressure the enemy and that’s why we incorporated some of these systems.”

Armored Core 6: Fires of Rubicon is currently in development for PS4, PS5, Xbox Series X/S, Xbox One, and PC. It’s out in 2023, with a release date still to be confirmed. Though there will be a Versus Mode (with more details on multiplayer coming later), the focus is on the single-player story. Stay tuned for more details and gameplay in the coming months.

it's a shame it's not a Soulsborne-Type game

Haven't heard of these games but looks or reminds me of titan fall or somthing with the machines.