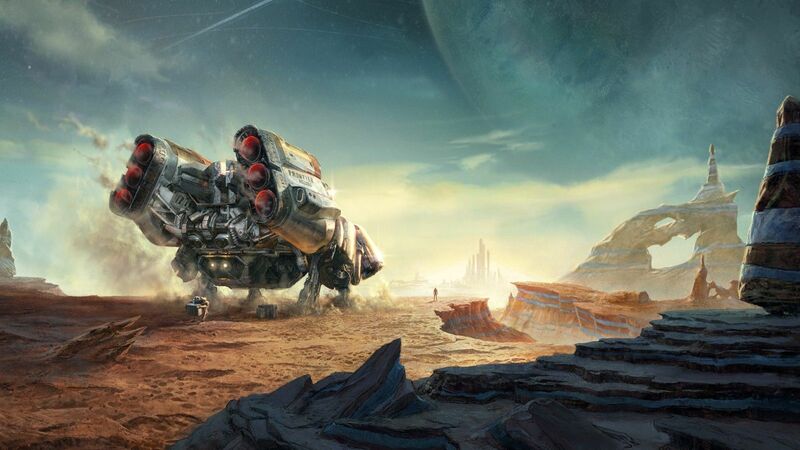 3.6
A string of newly released concept art for Starfield has revealed a variety of previously unseen concept art for the upcoming game. Developed by Bethesda Game Studios, Starfield is highly anticipated, with the reveal of more concept art being an exciting peek into the aesthetic behind the game.

If rumors are true Starfield preorders could start soon, so gamers have been winding up their anticipation for the upcoming title. The recent reveal of additional concept art offers more reasons for gamers to be excited. Multiple gameplay videos have given gamers a peek into how the world of the game will feel on screen, and Starfield may build off Bethesda Game Studios past record of stellar games.

Released in a series of tweets, the art offers iconic imagery from the game's universe. A burning orange setting sun is off in the distance, while another image shows a Republic ship against a deep blue background. The Republic is home to the United Colonies within the game. Starfield is slated to be Bethesda's largest game, and the concept art truly shows a diverse world with striking varieties of landscapes, ships, and characters. The images were shared in celebration of World Space Week.

To celebrate #WorldSpaceWeek, we'll be unveiling epic Starfield art from @posterposse each day for the next five days!

An incredible snapshot of life in space to celebrate #WorldSpaceWeek.

The city of New Atlantis, looking as vibrant as ever! 🏙️

This artwork encapsulates the wonder of landing on a distant planet for the first time and looking out on a new frontier!

A stunning take on Constellation's logo - a symbol of exploration and discovery.


The Freestar Collective's ship is represented with a western flair, hearkening back to the space-western style of space operas from the 1970s and 80s. Previously it was revealed the name of the Collective's capital city is Akila. The city of New Atlantis is featured in one shot, while another image shows a mech positioned beneath a huge ship. Given the diversity of the images, Starfield's story could expand upon the themes common in sci-fi RPGs. The images capture an interesting balance between pop-art posters and nostalgic memorabilia.

In previously released artwork, Ryujin Industries' sprawling megacities have a cyberpunk sheen, with high technology and massive cityscapes. Large suns and spacesuits make up several of the newly released designs. Starfield's unique features have been intriguing gamers for a while, along with other tantalizing and unique gameplay options that could make this a highly engrossing RPG. This newly released concept art brings gamers one step closer to immersing themselves in the world of Starfield. With the popularity of video game art among fans, seeing the sheer scope of design work that goes into a massive game is always worth a close look. Hopefully Bethesda keeps the original art coming, as fans eagerly await the release of this exciting game.

I always love to see the art work in games

You really get to see some great art

This game is getting lots of love already.