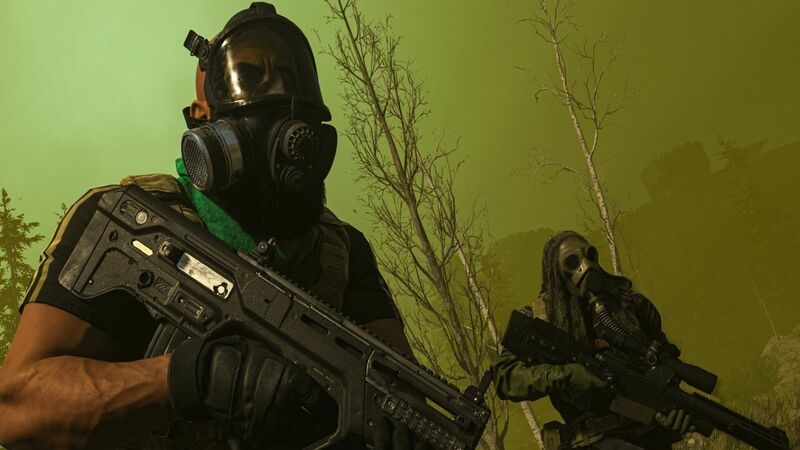 3
Battle royales are exceptionally complicated and due to that developers have endless options for improving the quality of the experience through updates and fixes. Call of Duty: Warzone is a great example of this, not only because it's seemingly in a constant state of needing repair but also because its developers are diligent in their work. Improvements are always being delivered in Call of Duty: Warzone. One upcoming example is unexpected but welcome, allowing Warzone players to decide when and if they use the gas mask item.

In the grand scheme of things, the Call of Duty: Warzone gas mask is relatively inconsequential. Players are able to pick up a gas mask and then if they wander into the "gas," Call of Duty: Warzone's mechanic for a shrinking battle royale zone, the gas mask will automatically activate and protect the player for a limited amount of time. It's a basic idea and it works efficiently. But it can be improved.

Allowing Call of Duty: Warzone players to decide when and if they use a gas mask adds strategic depth to the gameplay experience. It becomes as complicated as Warzone players want to make it. Players can reserve their mask for an emergency, they can use it when they have max health or low health, or tactically pull it out to create a more advantageous combat scenario. Automatically triggering the gas mask removes that strategic depth, forcing Warzone players to play around the mechanic rather than using it as they will.

Season 5 of Warzone is adding an option for players to manually toggle their gas mask on or off.

The mask will still be automatically taken off if it breaks mid gunfight, but this is a major request that players have been asking for since Warzone launched.


In the latest update for Call of Duty: Warzone, the battle royale's developers seemingly acknowledge the strategic potential of the gas mask and have added a toggle. The toggle is disabled for the time being, but it's clear that it could be turned on soon. The toggle will change whether Warzone's gas masks automatically trigger or if players get to decide when and where to use them.

While there's no officially confirmed release date for when the gas mask functionality will be unlocked for Call of Duty: Warzone, there are reports that it will be added with Season 5. Season 5 for Warzone is expected to begin in late August. An extra month of development should ensure the gas mask feature is working as intended upon release.

It just goes to show that even in-game functionality that isn't technically broken can still be improved. And even though Call of Duty: Warzone has plenty that's broken, the developers are still working on improvements, particularly in response to player feedback. Expect further information about Warzone's new gas mask feature in the weeks to come.

Finally they did this for the players

They need to get things done quicker ffs

yes they added the feature yet it sucks its broken lmao

Runts finally lol. they need to add verdansk back though fr

Fr fr, it's actually insane how long it took them to realise that it's been an issue lol

finally lol. they need to add verdansk back though fr