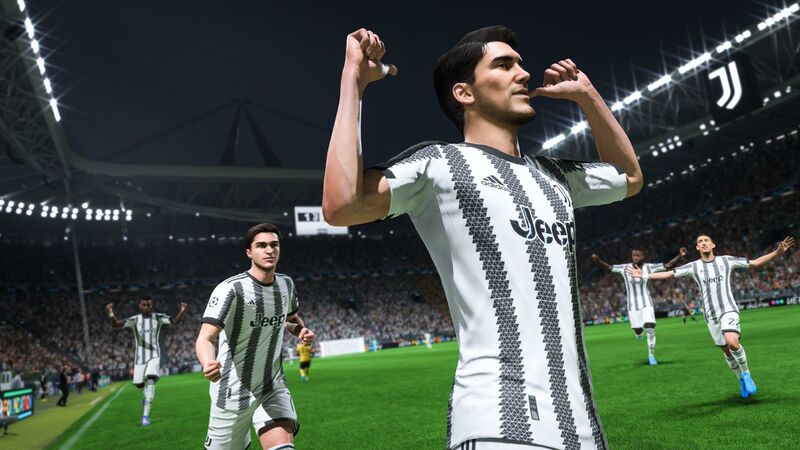 4
Juventus is making its return to the FIFA series in FIFA 23, EA has announced.

The team was a permanent fixture in EA’s series until it was confirmed in July 2019 that Konami had signed it up to be an exclusive partner club in eFootball PES 2020.

This exclusivity deal was a multi-year arrangement, meaning Juventus didn’t feature in FIFA 20, FIFA 21 or FIFA 22. Instead, it appeared in the game as Piemonte Calcio, complete with a fictional kit and logo.

EA has now confirmed, however, that Juventus will be returning to its series starting with FIFA 23 in September in what it calls “an exclusive multi-year partnership”.

This will mean the return of the Juventus name, kits and logo, as well as the club’s home ground, Allianz Stadium.

Former player Claudio Marchisio will be added to the game as a FUT Hero, and current squad player Dušan Vlahović will be an ambassador for the game.

It’s not yet clear what the deal will mean for Konami and its eFootball series, which currently boasts Juventus as one of its main ‘partner’ clubs.

Given that eFootball no longer consists of yearly instalments and is now a single, ever-evolving free-to-play football game, it may prove somewhat messier for Konami to remove the team from the game should EA’s “exclusive” deal require this.

“We’re excited to reaffirm our deep commitment to Italian football through this exclusive partnership with Juventus,” EA Sports‘ VP of brand for FIFA David Jackson said.

“This phenomenal club means so much to us and our fans, and will enable EA SPORTS to continue to deliver the most authentic and comprehensive interactive football experiences possible in FIFA 23 and beyond.”

FIFA 23 will be the last EA game to sport the FIFA name before the licence expires and EA and FIFA go their separate ways.

In May, EA said it will begin “a new era in July 2023” with the introduction of the EA Sports FC series.

On the same day as EA’s announcement, FIFA president Gianni Infantino stated that FIFA would launch a rival game.

In a strongly worded statement, Infantino insisted that only games carrying its official license would be credible to fans of football.

“I can assure you that the only authentic, real game that has the FIFA name will be the best one available for gamers and football fans,” he said.

"Juventus is coming back to FIFA for the first time since 2019" :: Login/Create an Account :: 3 comments

Wow definitely different to see it come back since 2019.

FIFA was better without them

Eat h him be the OP player of the game