Xbox Is Giving Away A Mjolnir-Themed Series X 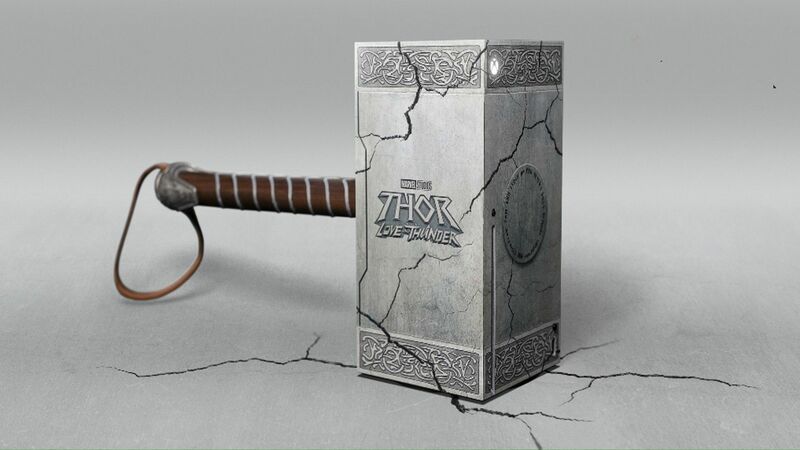 3.7
The Xbox Series X was compared to a lot of things when it was unveiled in 2020. Most notably a fridge, something Xbox found so amusing that it actually created a Series X fridge and gave one to Snoop Dogg. Someone saw the console and was reminded of Thor's hammer though, hence this incredibly cool giveaway running to mark the release date of Thor: Love and Thunder.

Xbox shared details about its latest competition, as well as a picture of what's up for grabs, on Twitter today. A one-of-a-kind Series X that has been designed to look like Mjolnir, the hammer that was smashed to bits, pieced back together, and has found its way into the hands of Jane Foster in the latest MCU movie. There's even a handle attached, something you can hopefully remove otherwise finding the perfect spot for the console might be a little tricky.

As for proving you are worthy enough to lift this unique Series X, that's actually pretty simple. All you need to do to be in with a chance of winning the Mjolnir console is retweet the tweet below, and make sure you include the Thor: Love And Thunder Xbox Sweepstakes hashtag. The contest is live now and will close July 21, 2022. Any resident of an Xbox-supported country is eligible, but those of you under 18 will need the permission of a parent or guardian if you want to enter.

The Xbox Series X is looking a little different after a bit of love and thunder.

Follow @Xbox and RT with #ThorLoveandThunderXboxSweepstakes for a chance to win this epic Mjolnir-themed Series X. Best of luck!


The full list of conditions can be found on the Xbox website, which notably mentions a custom controller to go with the Series X, but it isn't pictured. The controller will presumably boast a similar design to the Series X. The contest is, of course, running alongside the arrival of Love and Thunder in theaters. The fourth standalone Thor movie in the MCU arrives in cinemas next week, so you won't have your console to come home to after you see it, but it might arrive before the hype has died down if the movie is as good as many are expecting it to be.

The Series X console's somewhat simple look has allowed Xbox to have a lot of fun with unique designs like the Mjolnir one. It has previously given away a Series X that looks like SpongeBob, and limited edition Halo consoles sold out almost instantly. It also showed off some special edition Sonic controllers that were blue and red and covered in fur.

"Xbox Is Giving Away A Mjolnir-Themed Series X" :: Login/Create an Account :: 5 comments

That would look insane on my $10 tv cabinet. I'd love this, thors my fav avenger.

Big congrats to the one who wins this

I can't wait for this movie. The 8th can come soon enough!

This is easily the sickest special edition console ever ! I'm jealous lol I want / NEED this. 2nd best is probably the black MW2 Elite Xbox 360