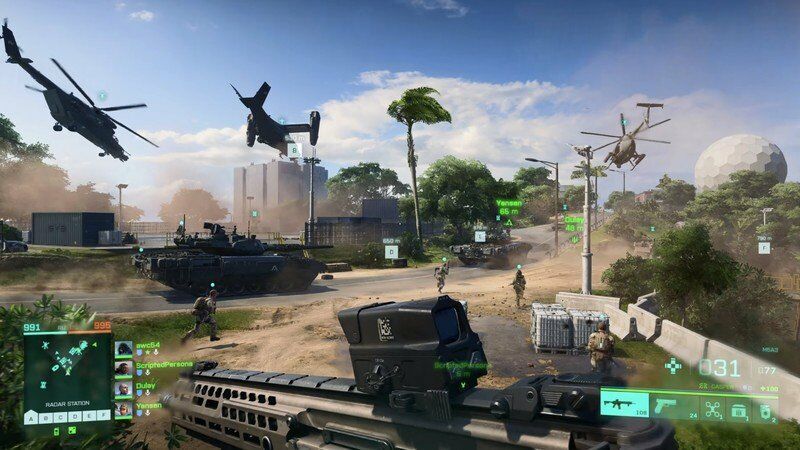 While there's been no official word from publisher Electronic Arts just yet, some eagle-eyed fans have spotted both games have had their Microsoft store listings updated to include the Xbox Game Pass icon - even though they've yet to be added to Microsoft's subscription service (thanks, XGP, via NME).

It's not entirely clear what games will be heading to Xbox Game Pass next month just yet, but the store updates certainly intimate it may include FIFA 22 and Battlefield 2042, and their arrival may be sooner rather than later.

If true, it's good news for EA fans. Already they've seen EA's own subscription service, EA Play, be added to Xbox Game Pass Ultimate for no extra cost, but both Battlefield 2042 and FIFA 22 - the latest installments of two of EA's biggest franchises, both of which are around six months old - have not been included in the standard Xbox Game Pass library until this point.

ICYMI, the BBC Proms will feature music from Battlefield 2042. This year's Proms will include a concert dedicated to gaming music, and included in that line-up will be music from games like Dear Esther, Kingdom Hearts, Shadow of the Colossus, and Battlefield 2042. Interestingly, though, even the Battlefield community isn't won over by the choice of the latest game in the shooter franchise…

Meanwhile, over at EA Sports, it looks as though It looks like EA is indeed rebranding its smash-hit FIFA franchise as EA Sports Football Club. Though still speculation for now, it fits with reports of EA struggling with soccer's governing body. EA also filed an application in the UK and the EU for something called 'EA Sports FC' last October, publicly stating that it was "exploring the idea of renaming [its] global EA Sports football games".

Did you know Microsoft is reportedly assessing plans to add advertising spots to its free-to-play games? The megacorp - seemingly aware of the possible backlash from fans - is reportedly "moving cautiously" with its plans, but is considering creating "a 'private marketplace', where only select brands can insert ads into games in a way that doesn’t disrupt the gameplay experience".

They won't be happy when they actually start playing them LMAO

That's quite cool that FIFA 22 is coming to game pass, Never played Battlefield 2042 but i guess a bunch of people will be happy about this.