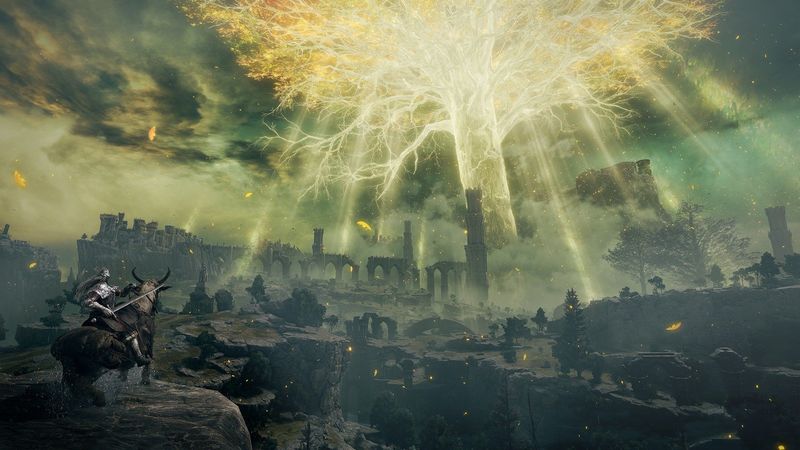 4
Elden Ring footage has allegedly leaked showing the highly anticipated game running on an Xbox One, of all things.

GamesBeat's Jeff Grubb posted the footage to his Twitter page on Saturday, October 16, with the simple caption "Alleged Elden Ring footage from Xbox One." The game is confirmed for release on Xbox's last gen console, and it does look pretty good, which can only mean good things. Keep in mind Twitter compresses videos, so this isn't the alleged footage in all its glory.

The reported Elden Ring footage is pretty tame, as there's no combat of any kind. The camera pans around the player, showing off an ethereal glowing tree in the background, what looks like the wall of a castle or city, and an expanse of open land beyond it. A few rather large eagles rest on rocks that fly away as the player walks near them, shedding feathers that flutter to the ground behind them.

Elden Ring is reportedly in the final stages of development, according to FromSoftware a few weeks ago, so it's not out of the realm of possibility that it is indeed real footage of the game running on last-gen hardware. The Washington Post's Gene Park quote-tweeted the footage from Grubb, pointing out that this is not the footage that was shown to the press a few months ago. Grubb mentions in the comments that the leaker claims this is an Xbox One, but it is likely footage of Elden Ring running on an Xbox One X, based on the frame rate.