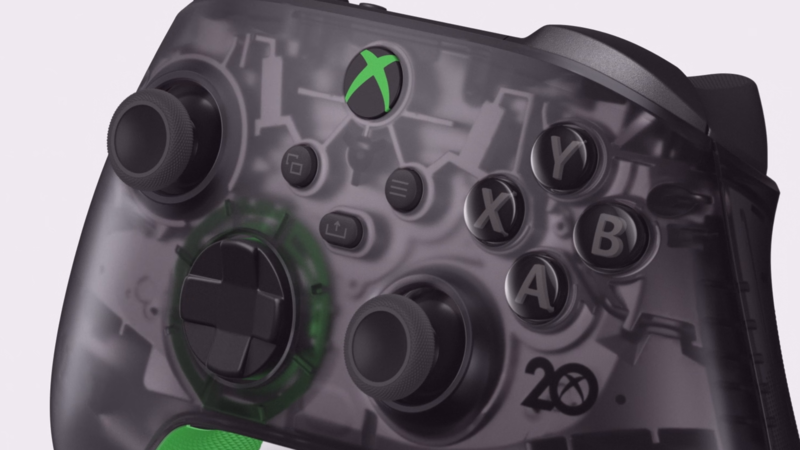 4.5
To coincide with the 20th anniversary of the Xbox brand, Microsoft has today announced that it will soon be releasing two limited-edition items in the coming month that will arrive on the same date as the launch of the original Xbox. Specifically, these accessories take the form of a new controller and headset, both of which are decked out in Xbox 20th anniversary iconography. And best of all, both items will be usable on any Xbox console that you might have.

Detailed on the Xbox website today, the new controller and headset are both set to release next month on November 15. The Xbox controller, which will retail for $69.99, features a similar color scheme that the first Xbox console had when it store shelves back in 2001. "The body of the controller features a translucent black finish with silver internals so you can see every detail. The nostalgic, green Xbox button brings us back to the first green Xbox logo. The iconic color can also be found on the back grips and around the hybrid D-pad," said Xbox's description of the controller. Conversely, the headset will also cost $69.99 and comes with a color scheme that matches the controller.

Inspired by our past, designed for your present.


As a whole, this is merely one small initiative that Xbox is taking to celebrate the 20th anniversary of the video game brand in the coming month. In addition, Razer is also poised to release a new charging stand for the Xbox controller that also features the 20th anniversary logo. And last but not least, a number of new pieces of merchandise have also recently appeared on the Xbox Gear storefront.

Perhaps the biggest way that Xbox will cap off the 20th anniversary of the brand though is with the release of Halo Infinite later this year. Although the latest mainline installment in Xbox's biggest franchise won't be releasing until after the official anniversary (it comes out on December 8), it will surely bring to a close a year that has already been quite substantial for Xbox fans.