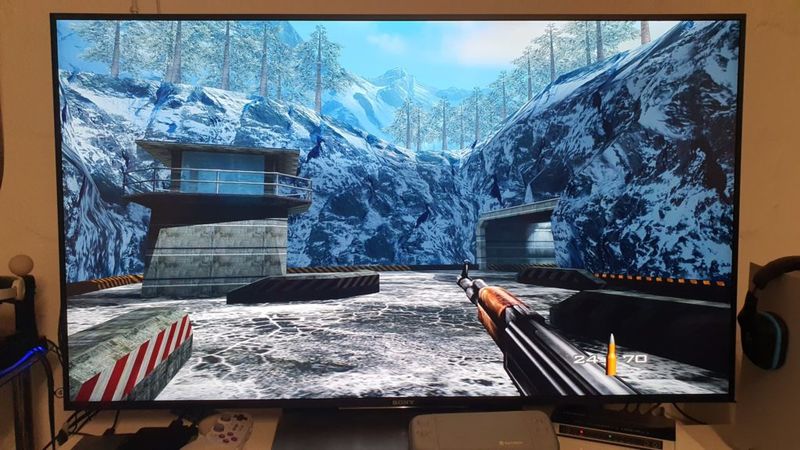 The 2008 project was originally planned to release digitally on Xbox 360’s Xbox Live Arcade platform, but it was ultimately cancelled due to rights issues, despite the game being virtually complete.

Now VGC has verified that a near-final ROM of the remaster is being actively circulated on file sharing sites. The ROM includes the full remastered single-player campaign and multiplayer.

The ROM leak follows the publication of a 2-hour video last weekend, and represents the first time the wider public has been able to play the remaster since its existence was leaked by a UK magazine in 2008.

Oh boy. I can't quite believe this. This is proper holy grail territory for me. pic.twitter.com/It6PVW5A8R

Thinking of holding a DF livestream this afternoon to discuss and play the Goldeneye 360 leaked version. It’s really good. Any interest? pic.twitter.com/h9J84JymMP

Be sure to press RB when playing Goldeneye XBLA pic.twitter.com/xBa7Qb9JSk


The remaster gives players the option to switch between HD converted graphics and the original N64 visuals, however, the planned online multiplayer mode does not feature in the leaked ROM, according to people with access to it.

GoldenEye’s remaster was also planned to incorporate online leaderboards for speedruns, as well as Achievements, but these are said to not be fully functioning in the leaked ROM.

Although Microsoft, rights holders Activision and original publisher Nintendo were said to have initially agreed on a licensing deal for the planned 2008 release of the remaster, the project ultimately collapsed due to the sheer number of parties involved in approving the re-release.

GoldenEye composer Grant Kirkhope – who was at Rare during the remaster’s development, but wasn’t involved in the project – told VGC last week that the Xbox remaster was cancelled due to the sheer number of parties who needed to be convinced.

“The main reason it didn’t happen was because there were too many stakeholders,” he said. “Microsoft, Nintendo and EON [owners of the Bond license] could never agree on terms, and that’s before you even start to consider getting all the original movie actors to agree to have their likenesses used again.

oh how it has been a long time

TTG I love the remaster downloaded and played it last night, like the RB button function to go to the classic mode. Runs most of the time really good.


Yeah I agree that feature is a really cool element

I guess your to young then...

I guess your to young then...

I love the remaster downloaded and played it last night, like the RB button function to go to the classic mode. Runs most of the time really good.

I probably did but I surely don't remember.