'Call Of Duty Ghosts 2' Possibly Leaked Ahead Of November Release 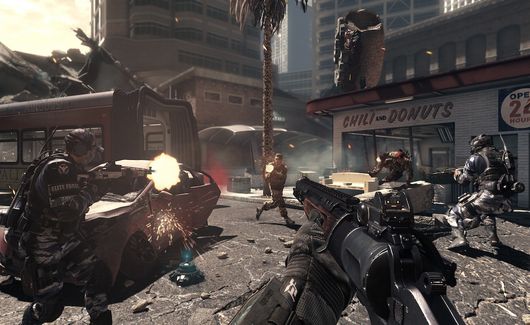 4.4
It seems Call of Duty: Ghosts 2 will be the new Call of Duty game getting released this year. This comes from an image appearing in Games magazine.

As seen in the magazine’s “2016 Most Wanted Games” list, Call of Duty: Ghosts 2 is mentioned, being developed by Infinity Ward. This makes sense, given that Infinity Ward has recently tweeted out they are working on the 2016 Call of Duty game.

Not only has the game been revealed, we also know a rough release date. According to the magazine, Call of Duty: Ghosts 2 will be coming out in November. This isn’t all that surprising, as every Call of Duty title for the last five years has been released in November. It’s interesting to see Infinity Ward return to the Call of Duty: Ghosts story. The first Ghosts game saw a slump in sales for the franchise. Hopefully Infinity Ward has a few tricks left to keep gameplay interesting and fans interested.

Please don't let it be Ghosts the last one neatly killed the franchise. We asked for a modern warfare 2 remaster!!

I'm sure charlieINTEL confirmed this to not be true

Ghosts 2, Ghosts was a brilliant game in my opinion and i wouldn't mind this coming out if it did but id like another Modern Warfare alot more than this.

I used to play competitive call of duty and ghost has to be the worst call of duty to date so I do hope this isn't true just for the community!

d0xy I didn't play the campaign for Ghosts, but then again I haven't played any CoD campaign since MW3. Competitive play was decent, memorable maps and I enjoyed the classic movement rather than the stupid new dashing systems we've seen lately.

Extinction was my favorite part about Ghosts and I sure as hell hope they expand on that some more this time around. It had lots of potential; if only they could have made more maps, more diverse enemies, and more of a sense of fear rather than just the waves of aliens every round. Ideally, they'd launch Ghosts 2 with at least 4 extinction maps, character vanity items, loot, and great weapons/traps to use in game.

Infinity Ward made the best CoD games ever, remember that - MW2 and CoD4. They can still redeem themselves. Hopefully they'll add in the same addicting elements MW2 multiplayer had, the great map design CoD4 and MW2 had, and the competitive play from BO2.

I was a bit spectacle about the idea of ghosts2, but if they do everything which you suggested in your comment, i think ghosts 2 would actually be a great success.

I really hope this is lies, not a fan of ghosts at all.

Im not buying anything with a exo suit. Ghosts was not that great but not as bad as dealing with exo suits if they do away with them ill gladly buy it.

Blegh. Hopefully not. I'll be sticking with Bo3 if that's the case