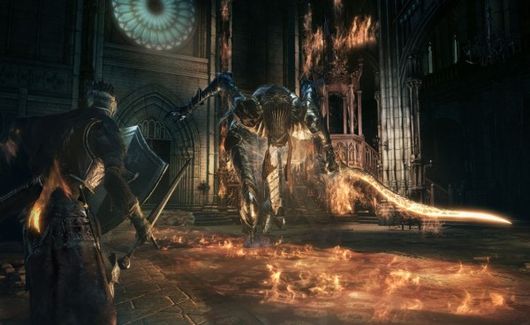 4.4
You get to play the original Dark Souls on Xbox One if you buy Dark Souls 3 digitally.

The Australian Xbox Store (via Reddit) has let slip a neat bonus for those getting Dark Souls 3 for Xbox One. A digital purchase of the upcoming title will get you a free copy of the original Dark Souls as a backwards compatible title.

Namco has yet to officially announce this, or the season pass details. Much like other game franchises that had a similar bonus, it’s a limited-time offer, and your game will be delivered via a code in 7-10 days after purchase.

This is good news for those who owned the original game on Xbox 360, as it indicates it will soon be available to play on Xbox One, regardless of whether or not you’re buying the latest iteration.

Pretty good deal I love how a lot of these are offering an compatible game with it.

not a bad offer to be honest! although i don't play either some people will appreciate this

Oh god, I actually want to keep the things in my room instead of smashing them up from raging lol

It's really cool that they are doing this for some games. They did the same thing for Fallout 4.

Mickers Another game i've never heard of. Good of them to do this though.

Never heard of it? Wow. I'm surprised, honestly. Even in the event you don't like playing those types of games. That's okay, though. You can't know everyone. I'll give you a quic rundown of it:

In Dark Souls, you can forget everything you think about video games. This isn't a game made were you 'get some gear and beat every boss' No. This is: "Get some gear, battle a boss about 15 times..Get newer gear and beat him. repeat that for every boss and spend 100+ Hours raging as you constantly die yet praise the game"

There seem to be doing this with a few games come kinda handy such as just cause, fallout & rainbow six

Not a bad deal but I am so bad at dark souls so it sucks for me.

Another game i've never heard of. Good of them to do this though.

Something decent coming out of xbox for once lmao

Why they dont make cod backwards compatible? Then this would be nice