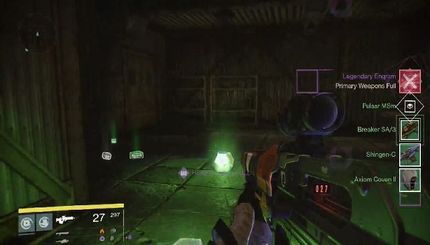 4.8
Bungie updated Destiny to balance some of its weapons and fix a few bugs today. For starters, the developer swatted a bug where the Valkyrie-O5X ship appeared to be the same as the Aurora Lance and fixed issues related to quick weapon swapping. The base damage of scout rifles were increased six percent, whereas the damage of all auto rifles as well as the Vex Mythoclast was decreased two percent and 34 percent, respectively.

The developer also shut down another loot cave, one located in the rocket yard area of the game. The hot new treasure farming spot, a room where Fallen enemies consistently spawned, surfaced after Bungie closed the first loot cave. "The Fallen have also retreated from their hold over the Rocket Yard to discuss a new takeover plan," Bungie wrote in its update notes. For now, Destiny looters will have to take the stairs, if you catch our drift.

Yeh now it's underpowered for the hardest gun to get

LOL Kids bitching about the Hardest gun to get in the game. SMH!

Well at least they balanced the weapons. Now they need to balance the crucible!

If you need a loot cave to be good at the game, then you really shouldn't be playing it.

I have another loot cave I've been using, I was on earlier and it still works so I'm happy it didn't get patched yet.

And then Bungie shuts down all loot caves, tweaks all weapons so higher levels don't have the extra edge to the game that they deserve and next thing you know, you'll have like 30,000 people playing Destiny.

Wow I did not even know that there was another one after the first loot cave.