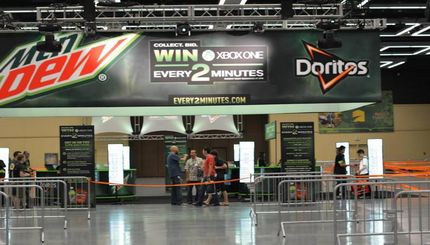 4.7
Microsoft has partnered with the Doritos and Mountain Dew brands to give away thousands of Xbox Ones in exchange for the longevity of your health, a press release revealed last week.

Specially-marked packages of Mountain Dew and Doritos will contain codes to be used as currency in online auctions for Xbox One consoles beginning on November 5. Participants can begin to stockpile codes on the contest's website on September 30, but nothing's stopping anyone from stockpiling the snack foods for the next two months.

PAX Prime attendees can also scan QR codes hidden in the convention center to bid on Xbox One systems in an auction on Sunday from 9 p.m. til midnight PST. The QR codes can be scanned with the PAX Guidebook App to bid on one of 30 Xbox One consoles, as well as subscription cards, gaming headsets and general merchandise. The press release notes that some codes "are worth more than others," so scrounging for as many as you can find might be worth your time.

McNuggets_Jr Pointless news in my opinion...

Not really, it lets everyone know that they could possibly win a Xbox one buy entering a competition. But you your opinion is your opinion.

Pointless news in my opinion...

Not really people may just like Doritos / Mountain Dew and end up winning ?!? Hows it a waste of time ....?

Entering this me hahaha even tho my luck is terrible!!

Jack-Wills How is this news? I bet no one on this site will win anything.

This is news because people have the chance to win an Xbox One... And why does it matter if no one on this site will win anything?

Hollywood_Undead Waiting for the next Doritoes online exploit. :D

Yeah it wont happen considering they are xbox ones

Waiting for the next Doritoes online exploit. :D

How is this news? I bet no one on this site will win anything.

So die of obesity to win an xbox one... Sounds fair. NOT