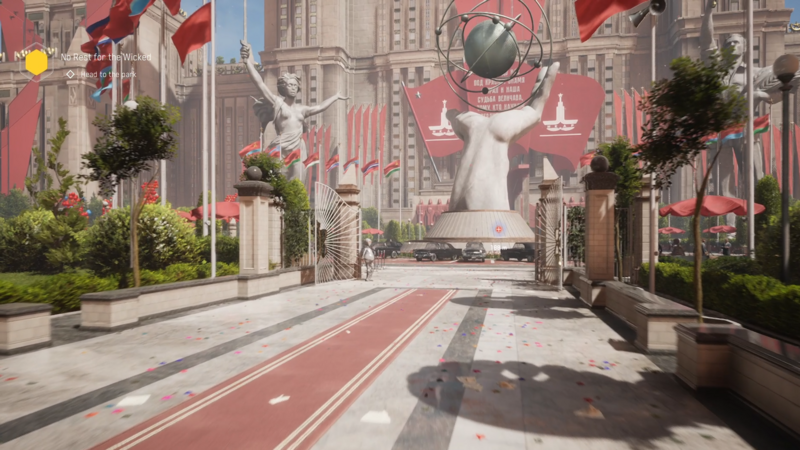 3.5
The upcoming single-player FPS Atomic Heart has been exponentially gaining more and more attention as its explosive gameplay and intriguing world continue to get shown off. However, unfortunately, with heightened attention comes a heightened demand for information, and, as is very common these days, this can result in insiders leaking footage before it's officially revealed, which is what happened recently where a Reddit user uploaded screenshots of what appears to be the beginning of the game.

The original source is currently unknown, as the Reddit post that currently hosts the screenshots claims to be a repost from another user that later deleted theirs. The only information about this original poster is via Reddit comments so take it with a grain of salt, but they claim that the individual said they had captured video footage of Atomic Heart as well but didn't know how to share it. They also claim the user said they played the first 30 minutes of the game and found it "boring."

Their subjective opinion aside, the screenshots do show a set of opening sequences that look quite serene, especially when compared to the several fast-paced and frenetic combat trailers we've seen so far. However, it is not uncommon for single-player FPS games to take some time setting the scene and introducing the player to the world before having them jump into the action.

Since a good amount is already known about the game's world, the screenshots are particularly reminiscent of BioShock, a game that Atomic Heart has already been compared to many times. It's clear the initial moments of the game will set up this world's illusion of utopia before it all begins to burst at the seams. The game is set in an alternative-history version of the Soviet Union in 1955, where the main character called P-3 is sent to explore the robotics facility that manages the country's "Utopian dream."

Via IGN, Atomic Heart recently showed off four robotic enemy types which you can check out here. As the video explains, they were all designed with a particular function meant to help humans in various fields of work, including day-to-day tasks, but it's clear something didn't go quite right in their programming, given they will all try to kill you.