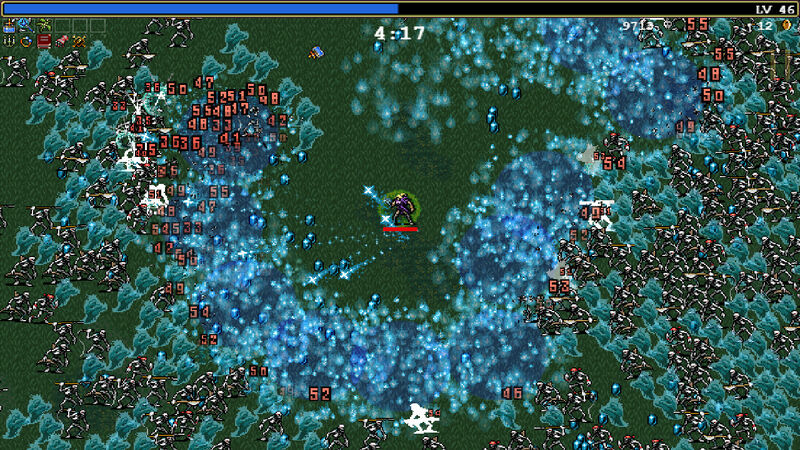 Created by solo developer Luca Galante, Vampire Survivors takes place in a region of rural Italy that has been overrun with monsters by the evil Bisconte Draculo. Players choose between several characters to battle through a horde of monsters as they explore top-down stages in search of valuable items. The player’s goal is simply to survive as long as possible while unlocking new characters and gear for subsequent runs.

Vampire Survivors just arrived on Xbox One and Xbox Series X/S consoles, with the PC version having launched on Game Pass in October. Xbox Boss Phil Spencer seems to have taken a liking to the game and has made numerous Twitter posts about Vampire Survivors. When the game’s official Twitter account announced its arrival on Xbox, Spencer jumped into the replies to say, “Such a fun game, I will sink hours and hours into this.” He seems to have stuck to that promise, sharing a screenshot on Saturday with the comment, “Garlic ftw.”

Such a fun game, I will sink hours and hours into this.


Spencer later explained how he managed a 25-minute run thanks to his Vampire Survivor character’s fully evolved Garlic and a Wand that increased his Gather Range. Unfortunately, this proved less effective against a giant robot, whose arrival forced him to play defensively and marked the beginning of the end of his run.

Spencer also replied to tweets from Rogue One screenwriter Gary Whitta, who considers Vampire Survivors one of the best games this year. Spencer also popped into the replies of the Twitch streamer and podcaster The Mav Show, who expressed interest in trying it out.

Just one of many truths spoken by @garywhitta over the years.... 😁


Spencer is among the more active executives on Twitter, routinely using it to engage with fans and developers. He even has time to congratulate Sony Santa Monica for the launch of God of War: Ragnarok. Spencer’s tweets also make him stand out as more personable than many gaming executives, with some Twitter replies acknowledging his genuine enthusiasm for games, including Vampire Survivors.

Phil Spencer is also far from the only person with a high opinion of Vampire Survivors, which quickly went from an obscure December 2021 release to the indie darling of 2022. The PC version has a rating of Overwhelmingly Positive on Steam, with 98% of players recommending the game. Unfortunately, Vampire Survivor’s Xbox port doesn’t have enough reviews for a Metacritic score, though the PC version earned a respectable 84/100.

Vampire Survivors is available on PC, Xbox One, and Xbox Series X/S.

It's great to see people like Phil Spencer playing these types of games, and comment how they are to them

Runts Yeah cuz the money there making haha. The game sucks though.

clearly you never touched a decent game besides COD in your life.

Yeah cuz the money there making haha. The game sucks though.