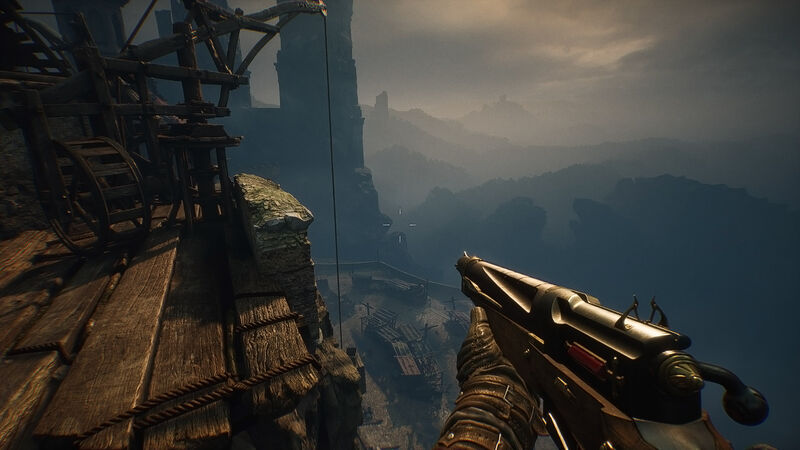 4
The Astronauts’ rogue-lite fantasy shooter Witchfire has suffered another delay. Originally slated to launch for early access in Q4 2022, it’s now aiming for an early 2023 release. Co-founder Adrian Chmielarz revealed in a new blog post that the first-person shooter has gone from arena-style combat to a semi-open world.

“To be clear, Witchfire is still a rogue-lite dark fantasy first-person shooter. That did not and will not change. But the way the player experiences the world has changed significantly. We’ve upgraded combat and exploration from arena style to semi-open world style, and that took time.

“I honestly thought that if we were ever late it would be because we tried to make a game that was too big or too complex for a small team like ours. While that is somewhat the case, there’s a pretty big chance we would have released in a month or two if not for the redesign.”

The original idea was to have large regions which the player experienced in a rogue-lite fashion. This means you enter an area, kill some monsters, and opt for left or right with a corresponding reward. Hades is an example of this approach.

Barriers that block an area’s exits enforced this, and Witchfire merged new and previously cleared areas. If you started in the Camp by the castle, fought on the Bridge, and entered the Castle Hall, you could take enemies from the Hall to the Bridge or Camp. Only retreating was possible, not moving forward.

Along the way, however, Chmielarz realized, “I hated the barriers.” “Sure, they made sense, blah blah. But they felt old school, looked kind of bad, and limited the potential of the game. I knew I could not stand them anymore.

“‘Look, guys. We have these beautiful open regions, but during combat, it’s all merely a decoration. It’s fake. I can’t use the environment to the max because I am limited by the barriers. I propose we remove them and redesign the game for that semi-open world experience.’ – I said during the next meeting.”

The team was opposed to it, but Chmielarz pushed ahead, believing it was “relatively easy and fast” to implement. Which it wasn’t, but things slowly started coming together. There were still “hundreds of small solutions that needed implementing” though.

The semi-open world is now “95 percent implemented” and “makes the game better. It is kind of hard for me to imagine the player did not have that freedom before. Sure, you can still be trapped by the witch in this or that spot, and some doors will be closed until you find a key, and it might be too dangerous to enter areas closer to the boss before you are ready – but the world is wide open for you to explore in almost any order, and you can both push forward and retreat as you please.”

The redesign has resulted in a few months being “lost,” but the studio is back on track with development. Witchfire Halloween Week is also coming in the next week or two, which will interest those who care about the “story and the world and great 2D art.” Stay tuned for more details and subsequent updates on the game in the coming months.

It's not the first game, and certainly won't be the last

Loks like a great game too. Be great once it does it get released

Yupp not a surprise most games are getting pushed back