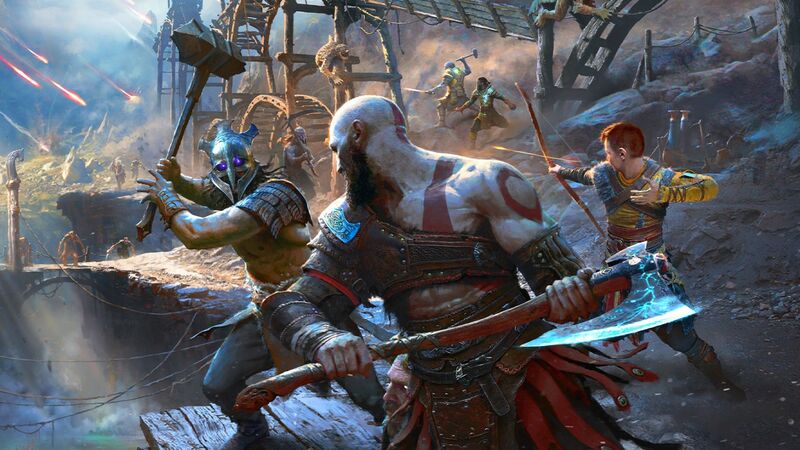 4.3
More gameplay from God of War Ragnarok was revealed this week to show off more of the God of War sequel and the weapons Kratos will use in it. He'll of course have his Leviathan Axe and the famed Blades of Chaos as he did at the end of the 2018 game, but as recent details confirmed, we'll see him pick up some new tools as well: the Dauntless and Stonewall Shields. This latest gameplay showcased those two defensive options as well as the upgrades bestowed upon his primary weapons.

The gameplay in question comes from Game Informer and marks the first time we've seen Kratos' new weapons and abilities shown off to this degree. One notable change made in this game is that the triangle button now empowers whatever weapon you have equipped rather than swapping between the Blades of Chaos and the Leviathan Axe. These "Weapon Signature Moves" entail imbuing the axe "Frost Awaken" and the blades with "Whiplash" which deal frost and fire elemental effects, respectively.

"In the last game, if you pressed Triangle, you recalled the axe," lead combat designer Mihir Sheth told Game Informer. "But if you already had the axe, nothing happened. If you had the Blades of Chaos and you pressed Triangle, you just went back to the axe. We looked at that concept and wondered, 'What if you could do something a little bit different with that button – a whole new suite of moves."

Accompanying these weapons are the new shields mentioned previously. This Dauntless Shield is more focused on quick actions like parries and counters while the Stonewall Shield absorbs energy instead of parrying. That energy can then be unleashed back towards enemies to knock them away. Other shields were also teased, so it looks like Kratos will again amass an array of tools to use throughout the game similar to what we've seen in past entries in the series. It has not been confirmed, however, that we'll see Kratos obtain other primary weapons besides the Blades of Chaos and the Leviathan Axe.

Loving the new weapons. The game is going to be epic

I'm ready to get my hands on this game

This is going to be awesome.

This game is going to be soo damn sick