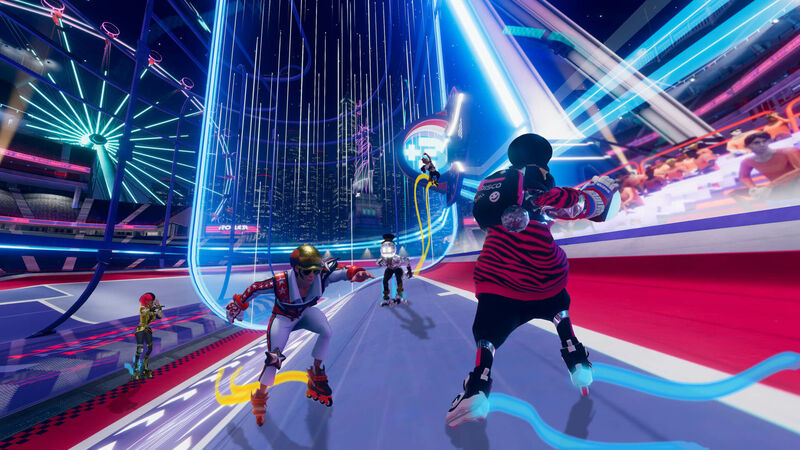 Over the weekend Giant Bomb journalist Jeff Grubb said he’d heard from a source that Roller Champions is going be cancelled after Season 3.

But in a statement released on Monday, Ubisoft denied it was planning to axe the free-to-play game, which was only released in May.

“Hello Champions! Let’s clear it out of the way first, Roller Champions isn’t getting cancelled, and Ubisoft fully supports it,” it said.

“What the Roller Champions dev team is doing is making sure we focus on what our players have told us needs improvement, and that supersedes all other priorities.”

To that end, Ubisoft is extending the length of the game’s current season, Disco Fever, for two main reasons.

The first is to release a patch that includes cross-invites so it can “deliver on the game’s promise of being a resolutely social experience”.

The second is to give the team more time to solve the issues “players have voiced as irritants”.

Hello Champions! Let’s clear it out of the way first, Roller Champions isn’t getting cancelled, and Ubisoft fully supports it.

You can rest assured we’ll keep you updated as we roll forward.


The statement added: “As far as content is concerned, we can tell you that we’ve got exciting stuff planned for the next seasons.

“We strongly believe, however, that before we release new content, we’ve got to do right by our players, hence why we are taking the time needed before we do.”

“Roller Champions has been well received by players for its fun and dynamic gameplay,” it said. “On both retention and revenues KPIs, Roller Champions is tracking ahead of Hyper Scape.”

It also delayed Avatar: Frontiers of Pandora and “a smaller unannounced premium game”—which is believed to be Assassin’s Creed Rift—to its next fiscal year beginning in April 2023.

To be honest, they actually should cancel it