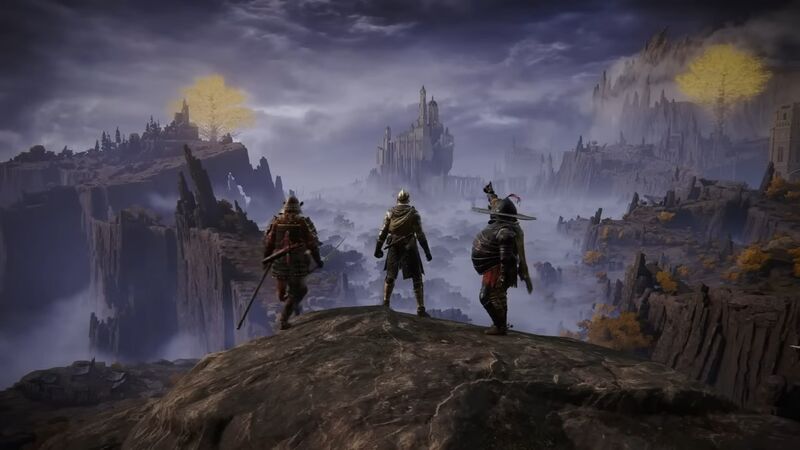 3.3
An image surfaced online this week which supposedly carried with it news of new Elden Ring DLC, but not everyone is convinced. In fact, many Elden Ring players seem to be skeptical of the existence of a DLC referred to as "Barbarians of the Badlands" even if there are many more who are simply wishing DLC would come out in some shape or form. Other non-Elden Ring releases were mentioned in the supposed leak, too, though some of them only added to the skepticism.

This image was first shared on Twitter in a tweet that's now been deleted, but it's since been recaptured and shared elsewhere like on ResetEra. It's supposedly a screengrab from a slideshow which one might see during an internal presentation talking about upcoming releases, and it shows that in Q3 FY2023, Bandai Namco and FromSoftware are supposedly gearing up for an Elden Ring DLC release.

Elden Ring DLC has long been talked about and speculated on online as players scoured the map looking for hints as to where that DLC might take them, so naturally, people would love for this leak to be real. Some of the most popular guesses have pointed towards a closed-off coliseum thought to be reserved for a DLC arena, and honestly, this leak looks like it could've very well been constructed to play off of those hopes. In terms of the game's lore, that coliseum is associated with the "Duelist" enemies, the huge, shirtless humanoid foes who wield massive axes and attack relentlessly. If not them, this DLC title could also be referencing Caelid, the red, barren area of the game which certainly looks like it could be considered "badlands" for those less familiar with it.

Also, as others have pointed out, the name seems a bit … crude? The DLC could very well be called Barbarians of the Badland, but if so, it'd be a departure from past FromSoftware titles. It's stylized as the first couple of Souls games DLC have been (Artorias of the Abyss, Crown of the Sunken King, and Ashes of Ariandel are past examples), but it's a bit more direct in its descriptions than we've seen before.

Elden Ring aside, other aspects of the image have similarly led to doubts. Dragon Ball Xenoverse 2 is still actively getting DLC, so not everyone's convinced that a third one would be released in the timeline shown in the image. While Code Vein was liked well enough upon release, people have remained skeptical that it would've done well enough to warrant a sequel, too.

Oh goody, just throw us in the deep end of the pit to fight for our survival :D

Dosis im not any good at games like this

This game is insane to play. Played it at my mates not long ago and done nothing but die haha