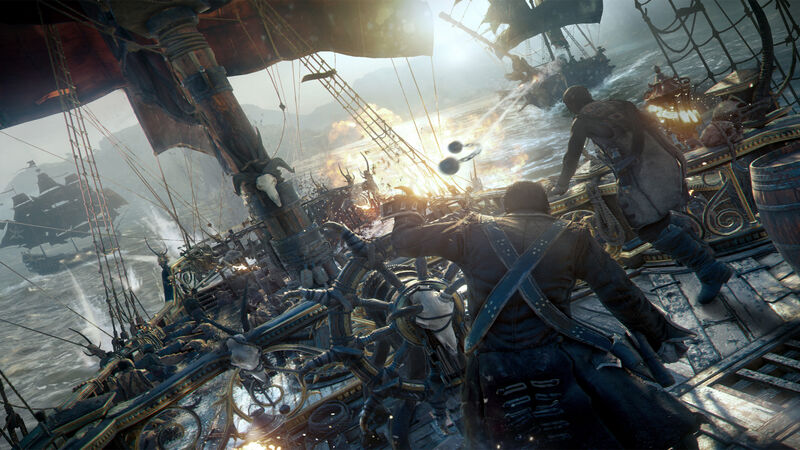 4
Ubisoft has revealed some additional details about its upcoming pirate game Skull & Bones. The latest update gets into the nitty-gritty on ship loadouts, and how you’ll be able to outfit your pirate vessel with everything you need for a specific job or a particular combat role.

In the latest devblog, the Skull & Bones developers talk about the careful preparation you’ll need to make before heading out on the high seas. Depending on whether you’re raiding forts or taking on rival gangs of pirates, you’ll need a ship that’s set up for the task. The devs say that your first chief considerations should be the ship’s size, its category, and its associated perks.

Ubisoft says every element of ship customisation, including hulls, weapons, and attachments, will be craftable at the blacksmiths, shipwrights, and carpenters that you’ll find in each pirate den. You’ll just need to bring along the blueprints and raw materials for each component.

Larger ships are generally more fearsome on the open ocean, the post explains, but won’t be any good for sailing up rivers and exploring inland lakes. That’s determined by the ship’s draught profile, and the size of the ship will in turn determine how many weapons you can fit on it, and which ones are compatible.

Ship categories include cargo, navigation, and firepower, and while any ship can haul some cargo or engage in combat, you’ll want purpose-built ships when setting out on a particular mission. A ship that’s designed for navigation can sail far and wide, but lacks the hull space of a cargo vessel or the fighting capacity of a firepower vessel.

The category and specific hull of your ship will determine which perks it has, and these can add some crucial flexibility to your build options. A navigation-type ship might include a perk that adds additional cargo space, or one that hardens up its prow and makes it excellent for ramming through blockades.

The post also includes details on the various weapons you’ll be able to bring to bear in Skull & Bones. These range from cannons to mortars, from ballistae to the close-range ‘Greek fire’ flamethrower. There’s even a weapon called the bombard that works like a cross between the traditional cannon and the long-range mortar, as well as several rack-mounted rocket armaments.

You’ll also be able to add furniture and pets, because no pirate ship is complete without at least one parrot and several cats.

You won’t be limited to a single ship – as you gain infamy and wealth, you’ll be able to expand your fleet of ships so that you’ll always have the right vessel for the job.

Sounds all good to me. I'll be giving it a blast

Just wish this was a classic mmo rpg