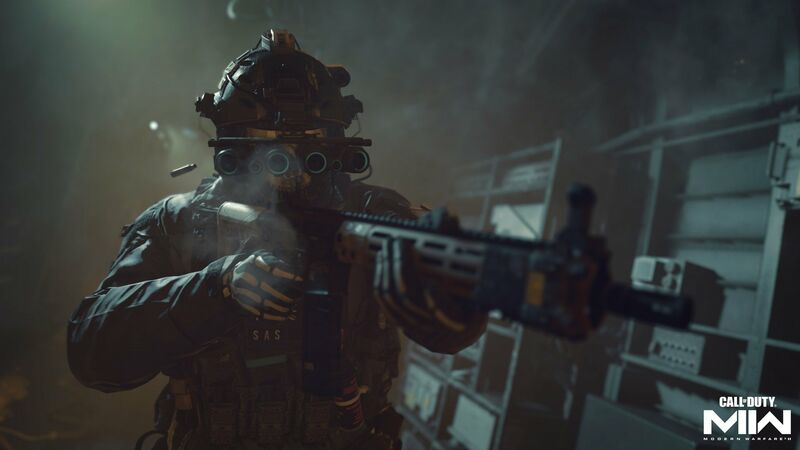 3.7
Call of Duty: Modern Warfare 2 leaks just keep coming, with datamining of the mobile version of Warzone now suggesting some new, Rainbow Six: Siege-style field upgrades in the shape of a reviving stimpistol, and a mysterious mask and gas canister called “battle rage”.

Reality, a UK-based leaker who previously shared images of what were supposedly multiplayer maps for the 2024 iteration of CoD, has posted on Twitter a series of screengrabs from the Warzone Mobile archives, highlighting what could be some of the new field upgrades heading for Modern Warfare 2.

The tactical camera, which can be thrown onto a wall and used to keep a lookout, perhaps on the staircase behind you while you’re sniping, is present and correct, as is the inflatable decoy, which is bound to be useful for drawing opponents’ fire, especially when they’re storming blindly into your bunker.

More interesting, though, is an icon for what Reality calls a stimpistol, essentially a blocky, plastic-looking handgun, which might serve a similar purpose to Rainbow Six: Siege’s MPD-0, whereby you can shoot it into downed comrades to revive them from afar.


There’s also the aforementioned “battle rage”, which looks like a small oxygen tank with a plastic mask, and that another Call of Duty leaker, Hope, speculates will serve as a kind of on-field buff, enabling quicker health regeneration, and temporarily infinite tactical sprinting.


Of course, this is all speculation, but two other potential upgrades also caught our eye. The sonar pulse looks like a portable radar, which you can deploy to highlight player movement and weapon signatures in specific parts of the map. The sound veil seems to do the opposite, whereby it will disguise any sounds you make, similar to the counter UAV from Black Ops and the original Modern Warfare 2.

All of these leaks, however, remain unconfirmed, with Reality themselves even admitting that the current images are missing details and textures, so it’s impossible to say whether they will truly end up in Modern Warfare 2, and if they do, what purpose they will serve.

We’ll just have to wait for the game’s full launch, on October 28, to find out.

hope it's all speculation ffs. it would be terrible if it became true

Dosis Eh not a fan. Just stick to the basic ones like dead silence or stopping power rounds..

Hated dead silence being a side unlock thing, just make it a perk already. Put something different like faster running for a limited time!

Eh not a fan. Just stick to the basic ones like dead silence or stopping power rounds..