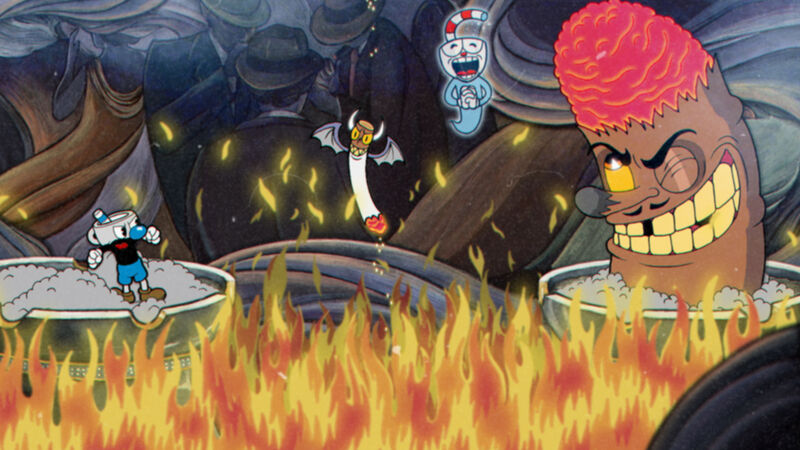 4
Some video games can be challenging enough, but then along comes the speedrunning community to show that it's possible to make life even more difficult. With Summer Games Done Quick recently raising more than $3 million, there is evidently room in the fan base for people who are not only highly skilled at playing games fast, but can do so for good causes. Traditionally, speedruns are performed in front of a PC, with the player sitting at a desk. However, one Cuphead runner decided to up the ante.

YouTuber EazySpeezy, who describes themselves as representing the "casual side of speedrunning," recently set themselves a challenge by taking on Studio MDHR's notoriously difficult run-and-gun game while attempting to climb a mountain. Using a laptop that was stored in an open backpack being carried by someone else, the runner was able to play through Cuphead while climbing approximately 2,790 feet to the summit of the largest mountain in Vermont, Mount Mansfield. Naturally, as many would have expected, this was not an easy feat, especially for a game as hard as this.

The final time recorded for the whole run was 08:02:02. Yes, that's more than eight hours of playing, but that does include taking regular rests, the climb back down, the car journey back, and even the final moments of the playthrough, which took place in the hotel room after EazySpeezy's laptop battery died and they couldn't recharge it for an hour. Cuphead by itself is near impossible, up there with the likes of Bloodborne and Battletoads, so being able to speedrun it while also on a long hike is an impressive achievement regardless of how long it took to complete.

As for the game itself, Cuphead recently launched its The Delicious Last Course DLC, which has gone down well with fans. Featuring new characters, environments, and bosses, players can expect this additional content to last around six hours. Obviously, this will likely depend on how skilled people are with the game in general. Those who are well versed in the vanilla experience could potentially finish it sooner, but that doesn't mean it won't present the same challenging gameplay elements.

On top of that, there's also Netflix's The Cuphead Show, which was released earlier this year. Evidently, this 2017 "boss rush" game has made quite the impact on the gaming world. Its cutesy rubber hose style of animation belies the difficult challenge that players face. To see someone speedrun it at all is pretty incredible to watch, but EazySpeezy doing so while climbing a mountain is equally noteworthy.

Good for them for achieving this

but nothing better than zombie speed runs lol