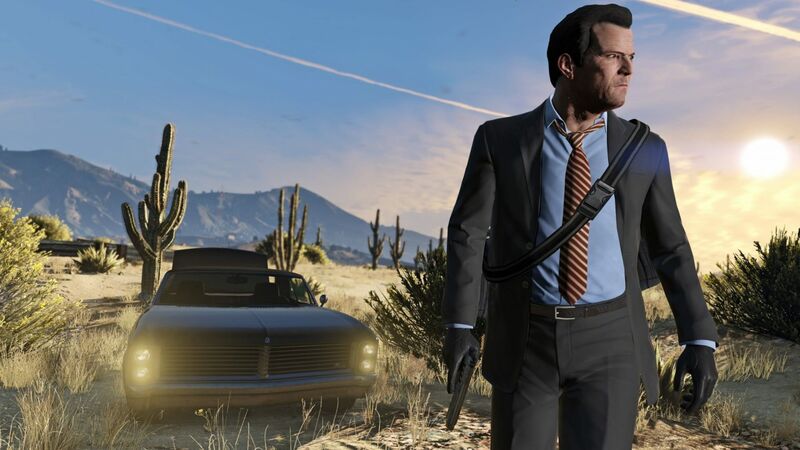 3.8
Back in December of last year, GTA Online fans were treated to a major piece of DLC titled ‘The Contract’. The massive update saw Grand Theft Auto V protagonist Franklin Clinton return after almost 10 years. Now, fans are eager for fellow protagonist Michael De Santa to make his return to the series.

Although the possible return of Michael is simply rumoured right now, Ned Luke (the actor behind Michael De Santa) did take to Twitter at the end of April with a rather unusual video. The short clip showed the actor in character as Michael, dressed in a full Cluckin Bell employee uniform, muttering the line “not my idea of a successful retirement”.

Many took those words to be some sort of teaser that the character would soon be returning to the series. Now, over a month later, new in-game files further hint towards a possible Michael DLC for Grand Theft Auto: Online.

As spotted by Twitter user rollschuh2282 (via Grand Theft Auto insider, TezFunz2), in-game files have revealed that Rockstar Games have included a new scenario spawn point. This might not mean much at face value, but the spawn point in question is located outside of Record A Studios under the name “movie_set”.

Michael De Santa was of course well known in Grand Theft Auto V for his love of movies, with a large portion of the character’s story revolving around this passion. After retiring at the end of Grand Theft Auto V, it is believed that Michael continued his dream job as a movie producer.

This was actually referenced in The Contract DLC, as Franklin drives through the movie lot during one of the DLC missions, he can be heard saying he has a movie producer friend and that he hopes he isn’t at work today.

With Rockstar Games clearly not afraid of bringing the original protagonists into Grand Theft Auto: Online, it could mean that the next Summer DLC may focus on the return of Michael De Santa.

In addition to the movie references from Vespucci Job Remix, @rollschuh2282 found out Rockstar added a new scenario spawn point, on GTAV PS5 & Xbox Series, in front of Record A Studios with "movie_set" as the assigned ped model set.

Yeah, keep on milking away

they will milk the game until gta 6 lol

I'm sure if this happens everyone will be happy.

When will RDO DLC come out :/