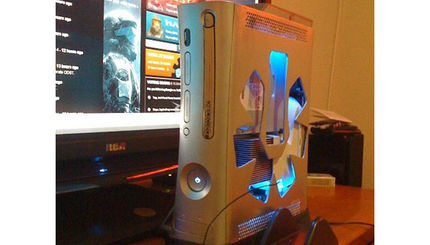 4.6
Even though the above mod isn't the flashiest or covered in all kinds of figures, we must say we enjoy the simple tastefulness of the Septagon'd Xbox 360. Created by Aron (via Hawty McBloggy), the mod also features a new silver color for the console and some built-in LED lights for a cooling and calming effect. And while any one of us would undoubtedly be satisfied with the above mod, Aaron has plans to keep going with the mod and will eventually add some plexiglass.
We have just one suggestion, Aaron: move the Xbox 360. How are you going to play any games with that thing in front of your TV?

That is an awesome looking xbox. I would love to have one of those. Halo ftw

As long as it wouldn't make it break faster that would be really cool. I have always wanted to look inside my xbox.

its a sexy looking xbox i would have it