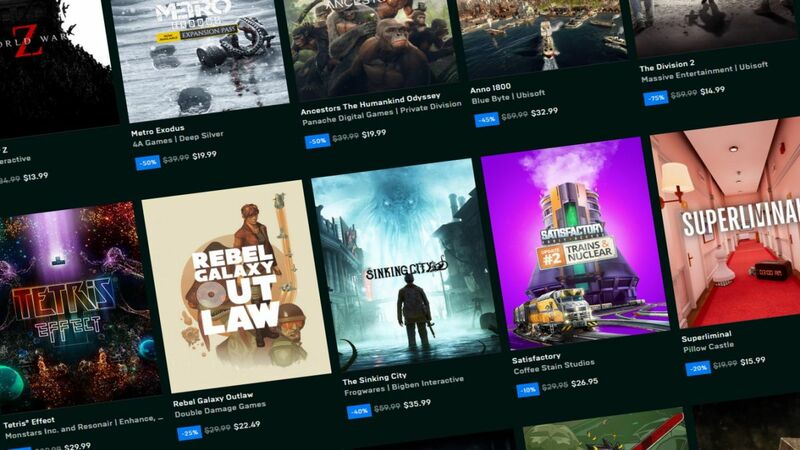 4
The Epic Games Store has evolved slower than many expected. Features for Epic's PC gaming storefront have been slow to come to fruition, though Epic has maintained a consistent rollout over time. Epic doesn't make a big deal out of each new feature release anymore, but Epic Games Store users will undoubtedly be interested to know about each eventual update. The latest update has arrived, introducing another basic feature to the Epic Games Store -- game library filters.

It may sound ridiculous to hear that the Epic Games Store had virtually no method of sorting players' game libraries up to this point, but that's the truth. Epic users could sort their full game libraries either alphabetically or by recency. The new Epic Games Store update improves the situation dramatically. A "Filters" section has been added to the game library that grants Epic Games Store users a variety of important options for parsing through their growing list of games.

Filter options include submenus for "Genre," "Features," "Types," and, "Platform." Each submenu then has as many options below it as makes sense for the category. For example, the Genre menu has nearly 30 different options to select from, from Comedy through trivia, back through card games, and into survival. The other menus can help Epic Games Store users find co-op games, VR games, game editors, or Mac games as necessary.


While filters may not be an experience-changing feature, the importance of the feature can't be understated. Many Epic Games Store users have dozens, if not hundreds of games by now simply due to the Epic's free offerings. It's easy to imagine forgetting a game's name and searching through a library of hundreds of titles trying to find it. It could be enough to turn someone against Epic in an instant.

Filtering in users' game libraries isn't just an important feature, it's a necessary feature. It's almost silly that it hasn't been available up until now, but Epic is taking its time. The Epic Game Store has to work without error securely for millions of users across the world, after all. That won't make users any less frustrated at the pacing of releases, but it's the truth of the situation.

Epic continues to move forward with several additional features planned for release in the relatively near future. User profiles is perhaps the biggest upcoming addition, but other features including game ratings, polls, and a notification system are also listed as "Up Next." The features may arrive slowly, but Epic Games Store users can trust that they will arrive eventually.

Yeash, it's about time they had this filter feature