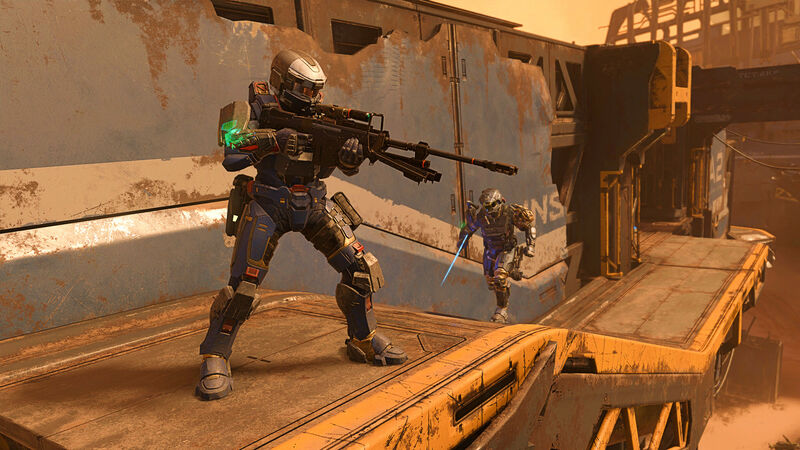 4.4
Ex-343 Industries developer Blaze Lightcap says that recent Halo Infinite Season 2 changes including nerfs to sliding and the removal of several trick jump spots make him “sad” about the direction the FPS game’s balance is heading in. The patch notes include a nerf to ‘ramp boosting’ – a technique used by players to gain extra momentum by landing into a slide on a downhill slope, which allows them to cross large distances quickly.

A series of “collision fixes on all previously released multiplayer maps” has removed the ability to stand on small props and thin ledges. These collision spots are often used by players to perform ‘trick jumps’ that allow them to traverse maps in clever ways – something that has been a long-running part of the series, with players creating clips and montages of their favourite trick jumps. Another player, Ligh1s, demonstrated that an open window could no longer be passed through even after grappling up to it directly.

The developer notes for the patch explain that they are considering if “the environment clearly communicates to the player their traversal options in a consistent and readable manner,” suggesting that they are wary of tricks that might be considered more ‘hidden’ techniques. This approach, however, is in contrast to comments made during the development of Halo 2 Anniversary, where the 343 team considered it important to preserve trick jump spots from the original game.

In discussions with Halo fans on Twitter, Blaze, who has also worked on level design for Splitgate, laments this approach, saying that “this particular example isn’t a big deal but it shows intent and is something that is likely across the board.” Blaze comments that removing mechanics such as these will only discourage the community. Trick jumper LBBubba echoes those thoughts, saying that the time and effort spent developing these skills and finding trick jumps “shouldn’t be seen as a bad thing.”

Halo commentator Alexander ‘Shyway’ Hope also spoke about the changes, saying he is “feeling betrayed” by trick jumps being patched out with zero warning. Shyway says that these systems encourage players to “invest more time in Halo and appreciate mechanics that make it unique and exciting.” As Blaze puts it, even simple changes like these take “more dev time than you’d expect” to implement – so “why invest manpower taking away things people enjoy?”

Not only invalidating the time commitment of those who already invested learning and teaching but deterring them from continuing. https://t.co/pvBSLZB3Dp