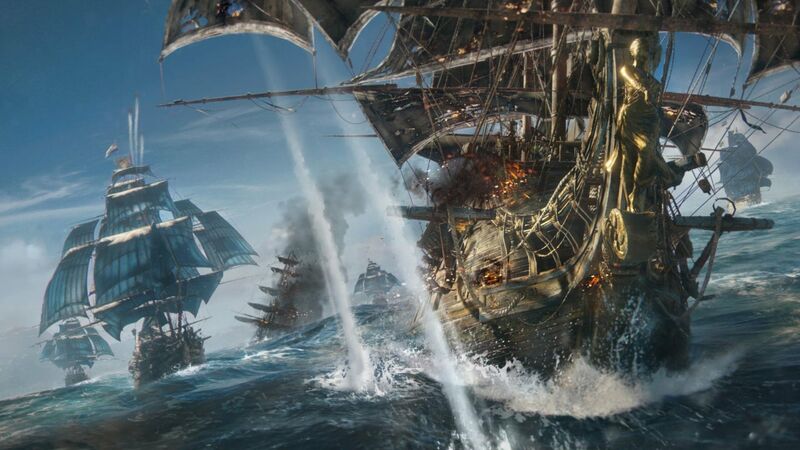 3.8
Earlier on Friday, Ubisoft's pirate adventure game Skull and Bones leaked a whopping six minutes of footage, signaling that it might finally be emerging from development hell. The footage has since been taken offline, but now we have an even better indicator that Skull and Bones is nearer on the horizon than you might think, as Kotaku now reports that Ubisoft is targeting a fall 2022 release window. Specifically, reporter Ethan Gach was told by sources at Ubisoft that it could launch as early as September.

The leaked footage is highly revealing with regards to Skull and Bones' story, setting, and gameplay systems. Consider that your spoiler warning.

Skull and Bones takes place in the Indian Ocean during "the golden age of piracy. Players start off as humble pirates sailing on a tiny boat, with the goal of the game being to build up your ship, crew, and reputation. You can earn "Infamy" points by completing activities like treasure hunts and, of course, pillaging enemy ships to triumph as the high sea's most notorious pirate. Ships can be stocked with rations, water, repair kits, and ammo before setting sail, but if you're downed, you'll lose some of that precious Infamy and respawn somewhere else, leaving your downed ship for the plundering.

If you've been following this game's development for any length of time, you'll know it hasn't exactly been smooth sailing. Without going into superfluous details, there were points where it was reasonable to question whether it would ever release. Thankfully, today things look a little different, with some leaked footage showing a lot of progress and a newly reported release window. Ubisoft also revealed in March that an insider program would let selected participants into the game ahead of launch, so be on the lookout for that in the coming weeks and months.