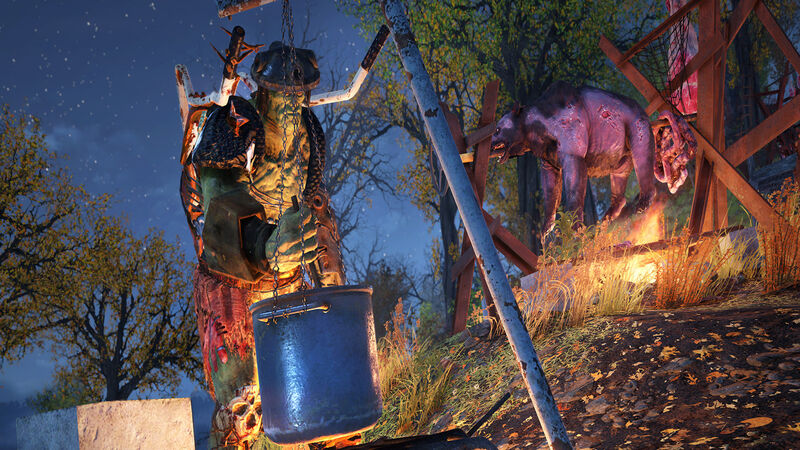 5
Fallout 76 routinely gets different events during the weekends to keep players occupied, but soon, we're about to see an event get underway for two weeks instead of just a couple of days. Bethesda announced this week in the latest Inside the Vault post the plans to kick off the next Meat Week event – better known as Meat Weeks, in this case – on April 26th. It'll run until two weeks later when it'll end on May 10th with players able to earn extra Legendary Scrip and other rewards in the meantime.

The two-week duration of this event was planned from the start with the game's event calendar listing it as running from April to May ever since that calendar was revealed months ago, so this isn't a case of the Meat Week event being extended to account for unrelated delays or anything like that. For those who haven't taken part in this event before, it revolves around a Super Mutant named Grahm and his desire for Prime Meat. Throughout these two weeks of the Meat Week event, Primal Cuts will be obtainable every 15 minutes from beasts slain in certain locations. Bring that meat back to Grahm and you'll earn yourself some rarities for the duration of this event.

"Every hour, at the top of the hour, Grahm and Chally will appear just south of Vault 76 in the Forest to kick off Grahm's Meat-Cook," Bethesda said about this Meat Week event. "Throughout the event, they'll need a few helping hands to host a successful shindig. Work together with other party guests to turn the meat spits, play a few tunes on the drums, clean up after Chally, and put out any fires that spring up, among other activities. The more successful the Meat-Cook, the better your chances to earn rare rewards! Don't forget to fork over the Prime Meat you've collected to Grahm, because he's happy to share some Legendary Scrip with you as payment for your efforts."

We hope you're hungry!
Grahm is bringing not one, but TWO helpings of Meat Week to #Fallout76 starting Tuesday, April 26th.

Read all about it in this weeks Inside The Vault here: https://t.co/qxrZSIoWkL pic.twitter.com/MrIBooRBBt

Good for them, Players will be happy