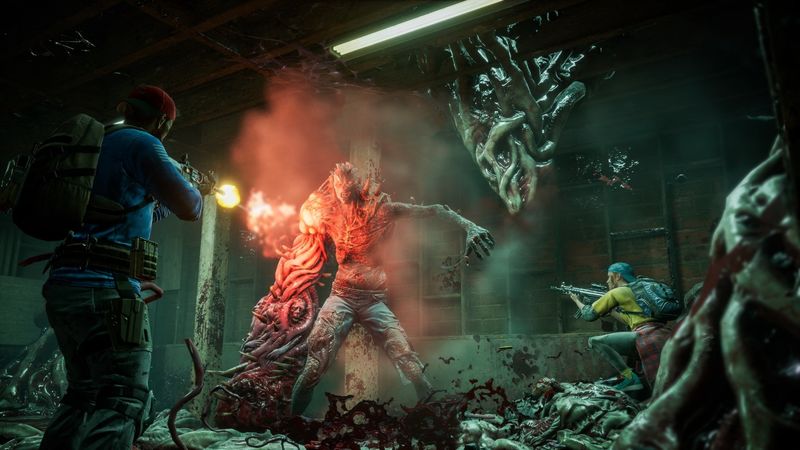 3.7
Back 4 Blood creators Turtle Rock Studios announced this week the game's first DLC, an expansion called "Tunnels of Terror." It's a DLC that'll feature additional Ridden and Cleaner characters for the community to play as and will also introduce a new "Ridden Hives" feature which consists of new enemies and tons of loot to be had. The DLC itself will release on April 12th and will be included in some editions of the game while also being offered as a standalone purchase.

Turtle Rock and publisher Warner Bros. Games shared new details on the Tunnels of Terror DLC this week alongside the infographic below which gives a broad overview of everything to look forward to. The highlights naturally consist of the new characters: Sharice and Heng on the side of the Cleaners with the Ripper, Shredder, and Urchin enemies being added to the pool of Ridden.

Tunnels of Terror will be coming to Fort Hope on April 12th, 2022. Here's a little sneak peek on what to look forward to! pic.twitter.com/AOrigv2UuK


Sharice is described as a firefighter wielding an axe as seen in the image above while Heng is "a tough as nails, no-nonsense restaurateur," according to a press released, but we don't yet know the specifics of what they'll bring to teams. Little is known about the new Ridden as well beyond the fact that they'll all consist of a totally new type of Ridden called "Warped Ridden." These three different abominations will all be playable in the game's PvP mode, Swarm, alongside the new Cleaners.

When you're not in Swarm, you'll be able to encounter these Warped Ridden underneath Evansburgh in the Ridden Hives activity the expansion is named after. This mode consists of seven different dungeons filled with these kinds of Ridden. The announcement said that the Urchins are able to set landmines of sorts, but nothing really was offered about what the other two Ridden play like.

A new difficulty mode called "No Hope" will also be added at the same time which sure sounds like it's a lot harder than what Back 4 Blood offers now.

If you want to get this DLC, you've got a couple of options. You can purchase it as a standalone add-on for the game, or you can expect to automatically get it if you've got the Ultimate Edition, Deluxe Edition, or the Annual Pass. The creators also confirmed that as long as one player owns the expansion, everyone else in their party will be able to play it, so if you've got a group, it'll make it much easier to get started.

The main game died as soon as it was released

Game is dead, they are beating it with a dead horse at this point