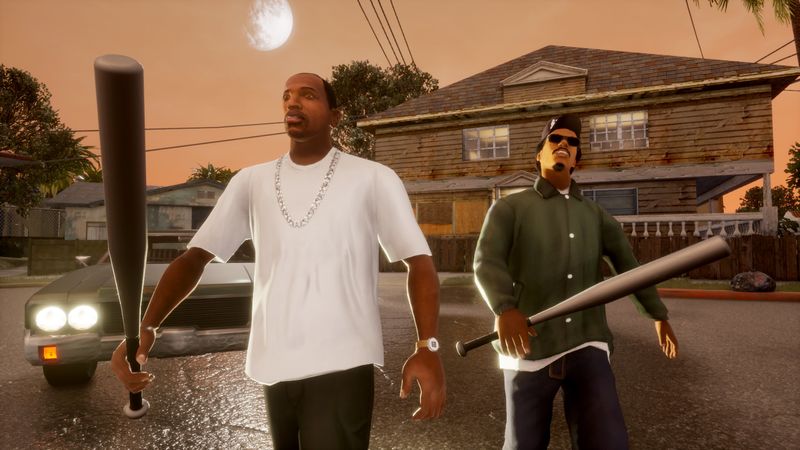 4.3
Most Grand Theft Auto fans likely know that the recent GTA Trilogy Definitive Edition didn't launch in the best state. Numerous bugs preventing progression have been reported, but the inability to save is a particularly big problem, and one that is apparently still causing issues in the game.

The GTA Trilogy has received fixes that help to mitigate some of the many problems that the games launched with. From its poorly rendered rain to falling through the ground, Rockstar Games and Grove Street Games have been working hard to clean up the messes in the trilogy. However, it seems that one major one is still lurking and causing problems.

As shared by Agozzo97 on the Grand Theft Auto subreddit, there's at least one glitch within GTA: San Andreas' Definitive Edition that's keeping players from saving entirely. For the unfamiliar, when players want to save in GTA San Andreas, they have to locate one of many floating floppy disks in the world. Upon touching it, it should prompt the player to save the game. However, this player discovered that upon trying to save, it instead disappeared, as though CJ had picked it up.


According to Agozzo97, this happened on the PS4 version, but others are reporting encountering similar or identical issues with the GTA Trilogy on the PC or Switch versions of the game. Agozzo97 notes that they tried to save at other floppy disk locations, but each would disappear without a save prompt just like the one shown in the video. Helpful fans in the comments suggest that the only way they've found to fix this bug is to go back to an older save, which of course could mean losing quite a bit of progress.

Unfortunately, much like with 2020's Cyberpunk 2077, there seems to be a long way to go yet before the developer and publisher fully fix all the bugs with the games. While this particular save glitch is a nuisance, others have shared their saved game woes in San Andreas in particular, highlighting issues with being unable to load auto-saved files and having normal saves become corrupted. Said players have been coping by saving as much as possible in a new slot each time, but needless to say, gamers shouldn't have to rely upon these maneuvers in order to simply play a video game.

While open world games like GTA and The Elder Scrolls aren't strangers to bugs and glitches, nostalgic gamers were understandably expecting better from GTA's Definitive Edition. Instead, many problems that were never a part of the original games have cropped up. For now, all players can do is continue to wait for further patches fixing issues like these, but the fanbase is understandably frustrated with Rockstar.

Grand Theft Auto Trilogy: The Definitive Edition is out now.