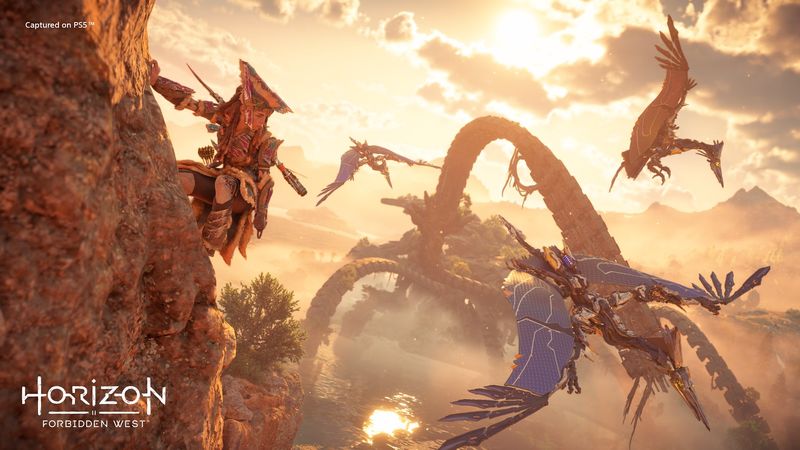 5
Horizon Forbidden West’s newest machine beast Slitherfang is the subject of an in depth article on Game Informer, with new details about Aloy’s foe revealed. One of the key attacks of the Slitherfang is the ability to shoot acid from a tank in the base of its throat. This can be counteracted by firing arrows at the tank and the components around it, which will disarm it meaning the Slitherfang will have to change its attack tactic. You can watch the full boss battle on the Game Informer story.

The Slitherfang has a rattle on its tail which it starts rattling in warning before discharging a wide ranging lightning attack, but this can also been counteracted by destroying the rattle with well placed arrow shots. When removed, Aloy can use the rattle as a weapon though the Slitherfang is resistant to shock damage. Slitherfang also has a hood attack which fires sonic pulses at Aloy, deafening and slowing her down. The beast can also coil up structures and will knock Aloy down from higher perches meaning players will have to keep moving and shooting. Slitherfang cannot be snuck up on but it will be weak to fire, ice, and plasma.

Aside from details about the Slitherfang, Game Informer has also released more details about playstyles in Horizon Forbidden West. The six playstyles are Warrior (melee attacks, Trapper (placing traps), Survivor (health/resources), Infiltrator (stealth), Hunter (ranged attacks), and Machine Master (hacking), with each of these having approximately 25 to 30 skills. These you can mix and match to help with approaches to the different systems. Workbenches will allow players to upgrade weapons and armours, and side quests will provide more useful reward items. In Horizon Forbidden West Aloy will spend much more time with NPCs, both in main and side quests, and there is more opportunity for NPCs to help during combat. Aloy will also be more revered in Horizon Forbidden West thanks to her actions in the first game, with many referring to her as Saviour.

Horizon Forbidden West will be released on 18th February for PS5 and PS4.

Cant wait for this release.