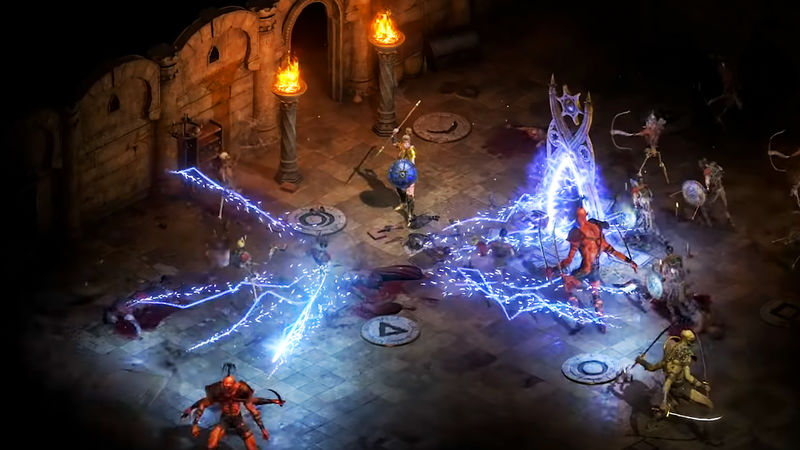 4
Diablo 2 is about to get its first class balance changes in more than a decade. Blizzard announced today that the upcoming 2.4 patch will adjust every character in order to expand "build diversity" and provide more opportunities to explore the unique capabilities of each class.

The patch is for Diablo 2: Resurrected, to be fair, and not the 2012 original, but it still represents a big change for committed, long-time fans who have stuck with it over the years.

The Amazon is already in a good place, but it will have some "underused melee skills" buffed so players will have a greater incentive to use them. The Assassin's Martial Arts and Traps skills are being "reevaluated," as are some of the Barbarian's Combat skills and skill synergy requirements. The Druid is getting buffs to Summon, Werebear, and Elemental skills, especially fire, and some of the Necromancer's specific summons are also being tweaked, although like the Amazon, Blizzard is happy with the state of the class overall. Some Paladin skills will change to make them more effective, as will area-of-effect damage auras, which are being made more effective at close range. Finally, Blizzard is "very satisfied" with the Sorceress class, but it wants to tweak some skills to make different kinds of builds more viable.

The other big change coming in the 2.4 patch is the addition of ladder play, which will give players the chance to unlock new Diablo 2 runewords that will only be available in the ladder. At the end of each season, players who successfully complete the runewords will have their characters moved into a non-ladder version of the game, and they will take a new character into the next season to earn additional rewards. Details haven't been locked down yet, but Blizzard is looking at having ladder seasons run for four months.

Four ladder modes will be available:

Hardcore Ladder: The hardcore (only 1 life) version of Ladder play that encompasses playing with four acts.

Standard Expansion Ladder: The casual version of Ladder play that encompasses playing five acts, as it includes the “Lord of Destruction” expansion content.

Hardcore Expansion Ladder: The hardcore (only 1 life) version of Ladder play that encompasses playing five acts, as it includes the “Lord of Destruction” expansion content.

Blizzard is also looking at improvements to mercenaries, adding new Horadric Cube recipes, and making changes to set items, and I imagine there will be some bug fixes and tweaks as well. The Diablo 2: Resurrected 2.4 patch is expected to launch on the PTR in early 2022, and you can get a closer look at what's coming in a developer livestream featuring design lead Robert Gallerani and senior game producer Matthew Cederquist on December 16 at 11 a.m. Pacific/2 p.m. Eastern on Twitch.

"Diablo 2 is getting its first class balance changes in 11 years" :: Login/Create an Account :: 0 comments