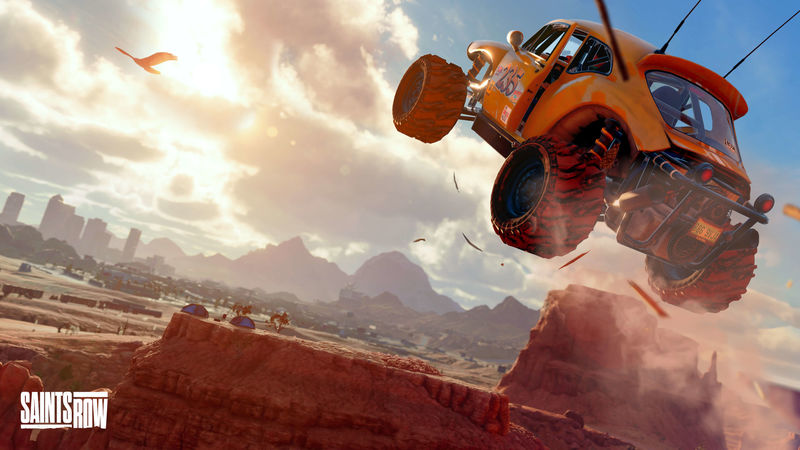 4
At gamescom 2021, Deep Silver Volition surprised us with the announcement of a Saints Row reboot. The title retains co-op and will be available on last-generation consoles as well. The gameplay seems just as over the top, but with a story that focuses on building a criminal empire from the ground. The official description on the Microsoft Store also points to that.

As the future Boss, with Neenah, Kevin, and Eli by your side, you’ll form The Saints and take on Los Panteros, The Idols, and Marshall as you build your empire across the streets of Santo Ileso and battle for control of the city. Ultimately Saints Row is the story of a start-up company, it’s just that the business The Saints are in happens to be crime.

Today, the team provided a glimpse into the philosophy behind the reboot. With Saints Row IV, Deep Silver Volition basically pushed the story to its breaking point. It was time to start fresh with new characters. On the game's official website, the team said the following.

When creating the new characters, we wanted to have real criminals that are also relatable. It was important they had the raw skills needed to start a criminal organization, but they also needed to start from the beginning. These aren’t grizzled characters deep in their criminal careers, but rather are at the start of their journey


The characters you encounter in the campaign are also quite interesting. You can read about them below.

Neenah is the best getaway driver in the business and has a long association with Los Panteros. She wants out of the gang life but leans into it for the sake of her crew.

Eli is a business mastermind, making money is more important to him than the moral issue of how that money is made. Eli is driven and determined, and doesn’t mind too much if a few people get hurt along the way.

Finally, you can customize your character — the Boss — in any way. You'll have a range of visuals and voices to choose from. Regardless of your look, you are the ultimate murder machine, that shoots first and asks questions later.

Now, let's get to the important part. One of the biggest questions fans of the franchise have asked Deep Silver Volition is about the use of purple. Luckily, it's still in the game, but you have to progress through the story to see it featured prominently.

We begin by showing the Saints at the start of their criminal journey, over the course of the game they form the Saints and rise to the top of the criminal underworld, reaping rewards and recruits along the way. The further they go down that path, the more you’ll see the purple 'uniform' come into play.

You can pre-order Saints Row from the Microsoft Store — or the platform of your choice — starting at $59.99. You can also pick up the Gold Edition that grants you the season pass and some bonus packs. Saints Row should launch on February 25, 2022 on Xbox One, PlayStation 4, Xbox Series X|S, PlayStation 5, and PC.

Are you excited for the Saints Row reboot? Let us know in the comments below.

Hoping this game will be fun, I liked the older ones but also liked 3-4 because they were simply fun. I'm interested to see what direction they take this new game in.