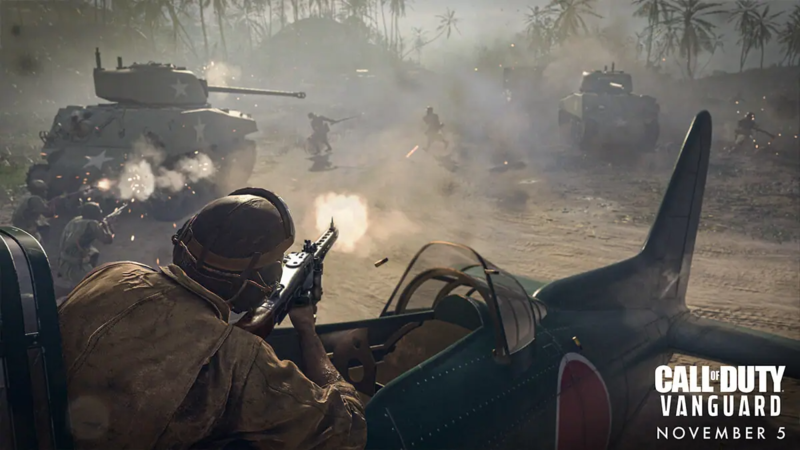 4
Activision, Sledgehammer Games, and Raven Software have revealed our first look at the new WW2 Pacific map coming to Call of Duty: Warzone alongside the release of Call of Duty: Vanguard on PC, PS4, PS5, Xbox One, and Xbox Series X|S. Unfortunately, our first look is nothing more than a mere teaser of an island, and what looks like dynamic weather, which is rumored to be coming to the game with the new map.

The quick glimpse at the new map actually came during today's Call of Duty: Vanguard multiplayer trailer -- which can be peeped at the top of the article -- right at the end of the trailer. And of course, the trailer doesn't outright confirm that it's the new Warzone map, but that's only what many are reporting, but it's unclear what else it could be.

If you don't want to watch over two minutes of Call of Duty: Vanguard multiplayer footage, skip to the 2:33 mark (this is when the roughly seven-second-long teaser begins) of the trailer or, alternatively, peep the tweet below.

It's worth noting that this may not be the final design of the island at all. In fact, it could be a placeholder of assets created specifically for the trailer. However, what is shown does look like it could be the actual island, or at least a representation of it. Of course, if Activision and co. provide any specifics on this, we will update the story accordingly.

FIRST LOOK AT THE NEW PACIFIC #WARZONE MAP TEASED IN THE MULTIPLAYER REVEAL OF #VANGUARD! IT LOOKS BEAUTIFUL!!! pic.twitter.com/YH2vSu8v2d


Call of Duty: Warzone is available, for free, via the PC, PS4, PS5, Xbox One, Xbox Series S, and Xbox Series X.

another broken launch game another cod
whats the difference?

this game is going to be dope asf

listen i been here since cod4 dont trust em. its just another COD game