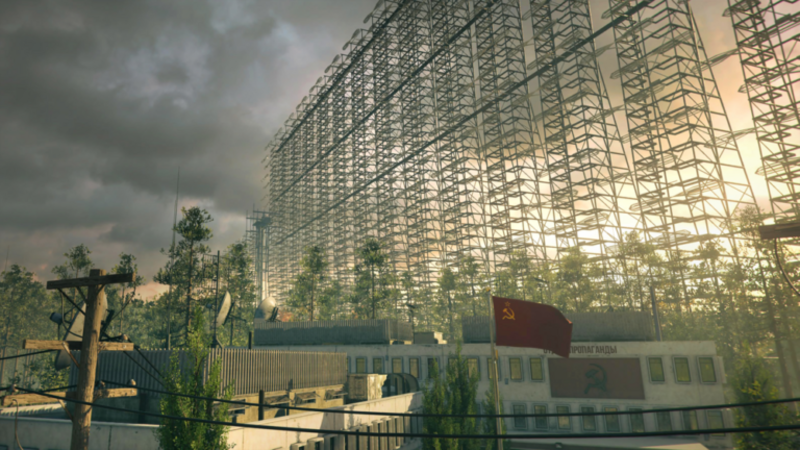 3.6
The first footage of Call of Duty: Warzone’s new map has been revealed in a leaked live-action advert for the game’s next season.

VGC can confirm that the work-in-progress live-action spot, which was first shared by Twitter account On Thin Ice, is authentic and shows snippets of the new 1980s map which we understand will replace Verdansk at the end of the current season, with an in-game event marking the transition on April 22.

The footage shows Cold War era landmarks replacing Verdansk’s own points of interest, including an in-construction Stadium and an aqueduct replacing the Dam.

The video also shows a mineshaft area and what appears to be the Duga-2 Radar Array featured in Black Ops Cold War’s Ashes to Ashes campaign mission.

The change will be marked by an explosive in-game event designed to narratively transition Warzone from the Modern Warfare era, to a setting more in line with the most recent premium series release.

Nuclear warheads recently uncovered on Warzone’s map will be used to trigger the revamp, similar to how Fortnite used an in-game event to transition to Chapter 2, with the zombies introduced in the latest season kicking off the countdown.

With another premium Call of Duty game due at the end of the year – which we understand is a new Sledgehammer title set during World War II – Warzone likely won’t see a similar revamp to coincide with that game until at least 2022, if at all.

It’s also very possible Warzone could skip WW2 altogether, in terms of a map revamp, and instead focus on coinciding with 2022’s game.

Both Modern Warfare / Warzone and Black Ops Cold War share underlying technology and tools, but otherwise much of the engine used for Cold War can be traced back to 2015’s Black Ops 3.

hey thanks for making tho luvy long time