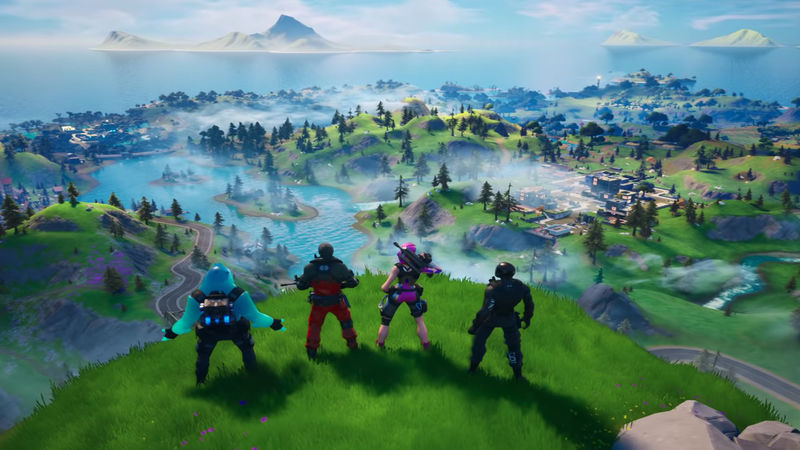 3.7
Thanks in large part to a newly leaked icon for the upcoming season of Fortnite, officially Chapter 2 Season 3, rumors are widely circulating online that the next great crossover for the popular video game will be none other than the SpongeBob SquarePants franchise. While that might at first sound like a joke, it is entirely serious, and would actually play into what many believe to be a heavily water-based season with a flood and everything.

The new Fortnite season is set to launch on June 11th at this point, having been delayed once more from its previous release of June 4th, so there is still plenty of time for the developers to tease whatever actually is going to happen. As mentioned above, the SpongeBob rumors largely focus on the fact that the new icon, which apparently briefly appeared on the PlayStation Network store listing for the game, happens to have a very familiar-looking island in the righthand background.

You can take a look at what appears to be the new season's icon below:

Apparently the Season 13 Icon got leaked in the PlayStation Store while I was asleep! 👀

The Underwater theme is now confirmed, just like all the other leaks related to it! pic.twitter.com/3aJWO3l6XV


Now, it's entirely possible that this is just a familiar-looking island. Or, it could be possible that this is a hint that a SpongeBob SquarePants franchise crossover is in the works, whatever that might look like. If you're not familiar, the three-tree island is an extremely prominent part of the opening to the SpongeBob SquarePants television show. And it would appear that there will be plenty of nautical nonsense in the upcoming Fortnite season.

Sources at Epic Games tell me that Season 3 will again have a Heroes VS Villains theme. These are the supposedly leaked skins of the 2 teams!


Fortnite Chapter 2 Season 2 is currently ongoing, and Season 3 is set to launch on June 11th. The popular video game is available on PlayStation 4, Xbox One, Nintendo Switch, PC, and mobile devices, and will be available on both the PlayStation 5 and Xbox Series X at launch.

OG_BOSS Personally hate these new themes. Can't beat the good old first season. Seems like there running out of ideas and it isn't the same. I suppose fortnite appeals mostly to kids

My ass is almost 23 and i still fw spongebob lmaooo

Again never have played Fortnite and never will. But a SpongeBob theme sounds cool.

Personally hate these new themes. Can't beat the good old first season. Seems like there running out of ideas and it isn't the same. I suppose fortnite appeals mostly to kids