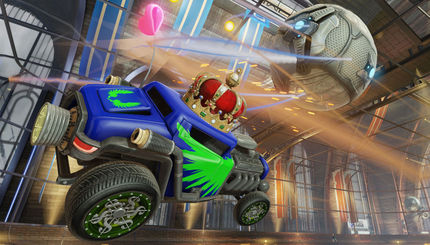 4.7
Rocket League should probably be available everywhere, since everyone wants it.

Rocket League launched on PC and PS4 in early July and has become one of the hits of summer, with 5 million downloads across the two platforms.

Speaking to Gamezone, Psyonix marketing boss Jeremy Dunham said the developer is focused on bringing Rocket League to new players now that it has become a success.

“We’re now in a position that we can expand our team. We are absolutely, 100% going to other platforms,” he said.

“What those platforms are and when we’ll come to them, I don’t know yet. Nothing is off the table.”

Dunham went on to say that the only reason Rocket League only came out on two platforms initially is because Psyonix is a small team, and therefore didn’t have the resources to work on multiple builds at once. The team fluctuated between eight and 12 members for most of Rocket League’s development, he added.

“We wanted to make sure the game ran well and that it had as many positive elements as possible, and that we weren’t just trying to port it to as many platforms as we possibly could just to try to maximize our profit,” he said.

The full interview contains further discussion of the team’s growth and the likelihood of various ports.

I've played this game a couple of times when I've been round my mates after work, its really fun although can take some getting used to!

The game is really fun but to get matched up against someone that is really good its hard as hell.

This looks intriguing I'm always looking for a nice switch up. Might have to give it a try.

I have looking at this game lately,
and I must say that this is something I can see myself buying for the xbox one.

When this is out on XB1 im buzzing

i love playing this game cant wait till xbox 1 release

Tricks When this comes to Xbox One will definitely be getting it.

Yeah i totally agree with you, i wouldent give it a second thought in getting this.

This game is the best, And I do hope it gets bigger and bigger and voted the number one game, This is the funnest game that Sony has had on their store since. I love and enjoy it, I do hope Xbox gets it and gets to play.

When this comes to Xbox One will definitely be getting it.