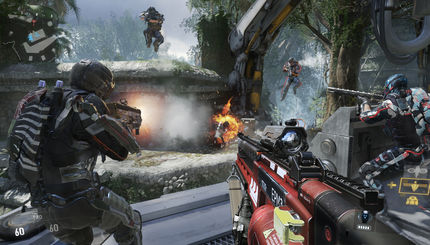 4.5
More updates are in store for Sledgehammer Games’ shooter, including more tweaks to Call of Duty Advanced Warfare‘s arsenal of weapons, according to Studio Head, Michael Condrey.

A handful of weapons were re-tuned in previous updates on Xbox, PlayStation, and PC, but as Condrey indicated on his Twitter, fans can expect updates to 15 or more weapons in the near future.

Exactly which 15+ weapons are getting updates is still up in the air, but we do know the SN6 sub-machine gun will be among them, according to Condrey.

Condrey also laid out a few more hints with regards to what updates Sledgehammer is planning on making to Advanced Warfare’s Elite gear drops. On numerous occasions, he’s made it clear that alternative ways to acquire Elite gear, aside from Loot Drops, will be available sometime in the future. Now, it appears that your Prestige level might have some correlation with the gear you’ll be able to earn.

@MichaelCondrey Is this a good place to be and haven't had an elite in 4 days, maybe give me a bit of luck. pic.twitter.com/LXJgxcfkKB

Well, I hope this improves this game

Still a bad game. Lol. Only thing good is Zombies.

BAL and ASM1 are the main guns, cray cray, even HC sucks.

Another bad thing about this game is there is about 3 good weapons, cod just isnt the same anymore were you could use any weapon and it would be decent

AW has some really horrid weapons. Multiplayer is mostly played with only the same few weapons.

xMIRAGEx They need so fix the Supply Drops. All everybody gets now-a-days is crappy items that nobody wants. I have yet to get a decent Elite weapon in a supply drop.

They need so fix the Supply Drops. All everybody gets now-a-days is crappy items that nobody wants. I have yet to get a decent Elite weapon in a supply drop.

dont see why you gotta be master prestige. but whatever. still gonna stay at 11th no matter what.

The reason the guns are constantly being updated it because people keep moaning about them being unbalenced...