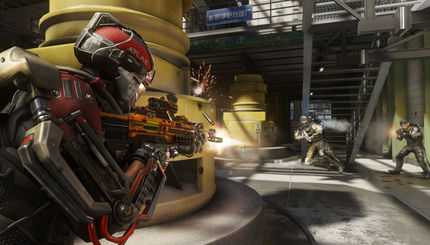 4.5
Call of Duty Advanced Warfare's Havoc DLC was officially announced by Sledgehammer Games. Havoc is the first DLC pack for the game and will launch first on January 27th on Xbox One and Xbox 360 then followed later on other platforms. MGSV Wont be wasting anymore of my money anymore on this stupid franchise...

yeah same here. Can't believe I wasted so much on it .

Wont be wasting anymore of my money anymore on this stupid franchise...

I absolutely hate this game, can't wait until I get my PC setup to play some CS GO.
Wish they reverted to no boost jumping :S

bought it for that gun DONT it sucks

I honestly can't wait for the zombies... Should be fun.

Never cared for CoD AW. I think it was a poor copy or titanfall but w/e. I hope the next cod is different. These MP names like "drift" just keep getting goofier and goofier.

I will only be getting this for the zombies as that's the only part I like about the game.

Still trying to decide on whether or not I want to purchase the season pass. I'm absolutely loving Advanced Warfare at the moment but I'm not sure if that love will start to fade.

The idea of DLC is super cancer. Make a game where people aren't bored enough to buy 15 dollars worth of DLC 3 months after the game comes out.