Minecraft Xbox One is on sale now 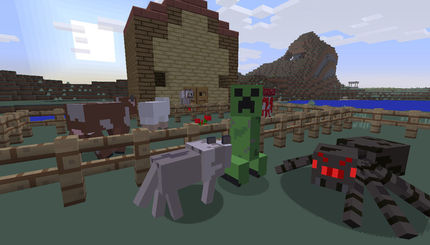 4.6
The game costs $19.99 US (or $4.99 US if you already own the Xbox 360 version), weighs in at 553.09 MB, and supports any and all Minecraft downloadable content you may have bought for Xbox 360. It's possible to transfer an Xbox 360 world to the new gen version but not vice versa - worlds can be up to 36 times larger on Xbox One, you see, which is too much geography for its elderly predecessor to process.

The game will be sold in stores as a download code later this month, with a disc-based offering to follow this winter. Read our interview with Mojang for details of DLC plans and platform differences. Newcomers may also wish to peruse this comprehensive guide to the Xbox 360 version - bigger worlds and 1080p visuals aside, the two versions are identical.

"Minecraft Xbox One is on sale now" :: Login/Create an Account :: 59 comments

Nice to see them updating it for next gen users. I, myself, won;t bother with it and if I ever feel like playing MC again, I'll stick to playing it on my PC. Then again, now that MS own MC, maybe they'll stop people from being able to play on PS3/PS4 and possibly PC? Would be a nice cheap way for MS to get more XB1 sales. It wouldn't really shock me if MS done something like this.

minecraft is truly an amazing game. It's a shame Microsoft is purchasing it now.

Thespian It really wasnt that fun on xbox 360. I am second minded on getting this.

I personally found the game great. Give yourself a challenge if you do decide to purchase the game and try to build a city or numerous things off YouTube videos.

great game just wish we didnt have to pay to transfer it to xbox one.

I will probably end up getting the game for the sure fact of just owning the game, and whenever I am bored. It'll be there.

It really wasnt that fun on xbox 360. I am second minded on getting this.

Ethics It has always amazed me that minecraft is such a small game in memory but so great in so many ways.

exactly, it's so simple and still the possibilities are endless

yeah i agree so small but really good

I think it's the most relaxing game to play especially the music. I used to play it all the time back in the day but I rarely play now ever since creative mode was added you can just get any item. Some of you may say well why don't you play survival? Yes fair enough but just knowing you could go in creative mode and get what you need just ruins it for me.

finally the deal showed for me so i bought it

I thought if it was in Euros it would be like 2.50. I thought Euros were twice as much as US money.