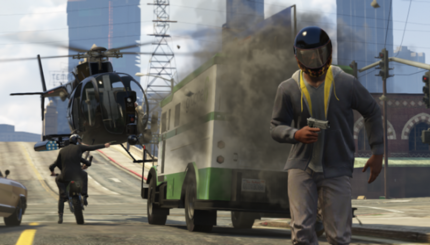 4.3
Grand Theft Auto Online will give players The Business Update on March 4.

Rockstar revealed the next free content update for Grand Theft Auto 5 and its multiplayer counterpart on Thursday.

The cars and weapons will be automatically added to the garage's and arsenals of GTA 5's single-player mode, while online characters will have to spend their in-game cash to purchase them individually.

Rockstar promised more details are soon to come for The Business Update's upcoming Event Weekend, as well as future updates for online heists and new side missions for story mode.

After this weekend the items added in the Valentine's Day Massacre Special will be off the market, meaning players who want the mobster-themed weapons, vehicles, and clothes will be otherwise out of luck after midnight PST on Sunday.

Rockstar is the target of a lawsuit from Karen Gravano of VH1's Mob Wives, who claims her likeness and story was used without her permission for a random-encounter character in GTA 5's story mode.

GunzForHire Heavy pistol? Deagle is it you ...

Probably not. Collector's edition people got the Deagle. Why would they then make everyone have it, but with a different name?

xboxman400 I don't see how they can just take the Guns and cars purchased in game away because that would just be a waste of $600,000.

I don't see how they can just take the Guns and cars purchased in game away because that would just be a waste of $600,000.

Heavy pistol? Deagle is it you ...

Sounds good, will be interestinf for a while

Ages Ahh I have literally no money on GTA V and they are coming out with all these cool things. ;(

I don't think anyone has loads of money just yet haha

Sounds like a nice pack, Only a week now for it.

The cars should be cool. :) Cant wait for Heists though. :(

Gossip I don't think there will ever be heists what a waste of time.

there will be, it's just a matter of when.

Ages Ahh I have literally no money on GTA V and they are coming out with all these cool things. ;(

it's more interesting without money because you can earn what you want.
the old money glitches was a game breaker and not fun at all.