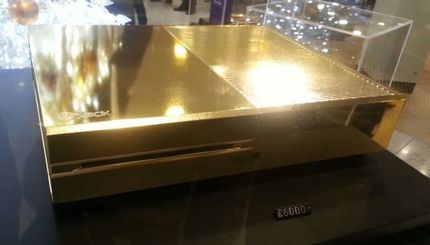 4.7
Are you thinking about buying an Xbox One? Not impressed by its two-tone black finish? In the market for something a little more garish? Result.

Feast your innocent peepers on this monstrosity. It's an Xbox One that's been gold-plated.

We aren't just talking a gold-coloured paint job here, mind you. That's proper 24-carat gold covering the outside of the console.

Initially spotted and reported on by Reddit, the gold Xbox One can be found in that legendary London boutique of extravagance, Harrods.

You might want to check your piggy bank before you pop over, though. At a cost of £6000 ($9779) there's a slight premium on the price compared to the standard version of the console.

Still, we're sure you'll agree it's worth it just to see the look on everyone else's face as they seethe with jealousy at your golden slab of wonders.

"After all," you'll chuckle at them, "you can't use Microsoft Bing without a little Microsoft bling!"

Then you'll follow up with "you can't spell Quantum Break without Au", which less of them will get even though it's a really clever chemistry joke (albeit a slightly awkward one), which in turn will make you feel even more superior.

Well, at least you will until you realise your console is coated in a conductive metal. Then, when it overheats and you send it to Microsoft for repair, you'll end up with a bog-standard replacement unit. Justice.

If you don't have a spare six grand knocking about, you could always cover a normal console in a big sticker instead, giving your system the half-pink, half-wood effect Richard Branson could only dream of.

i wonder if someone form TTG will it it?

This brings new meaning to the song all gold everything. lol

Nah although gold IS conductive, it's actually excellent at dispersing heat so it'd no doubt improve heating.

But yes a powerful static shock could ruin the bread board.

I guess its one of those things you want, just so you can say you have it..

Hey, it's not too much of a higher price than the ones on ebay right now LOL!

I'd love it if I was rich, if I wasn't I would probably hate myself for buying it.

Genetics lol what a waste of money

The Fact it's a Xbox one, or that it's made out of gold? Both in my opinion

lol what a waste of money