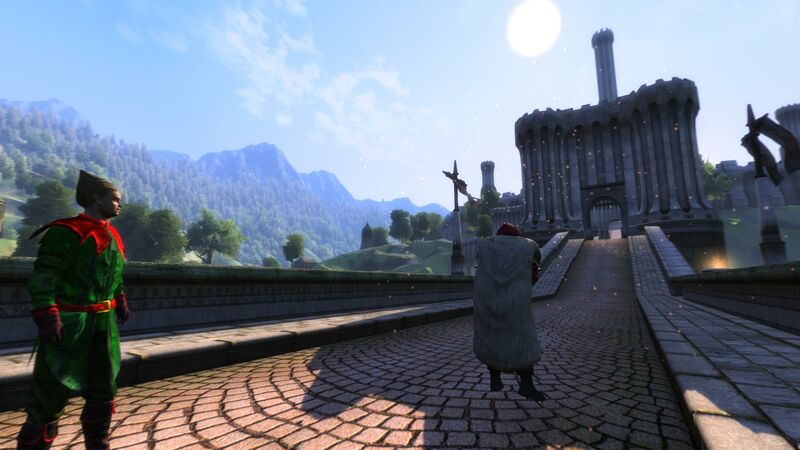 3.8
The volunteer modding team behind the fan-developed Skyblivion mod has dropped a trailer announcing the intended release year for the ambitious project. Featuring the original Patrick Stewart voiceover from The Elder Scrolls: Oblivion, the trailer states that the game will be released in 2025.

Development for Skyblivion, a conversion mod that aims to recreate The Elder Scrolls: Oblivion in the more capable Skyrim engine, began over a decade ago in 2012. Since then, the dedicated volunteer modders have immersed themselves in the task of recreating the game world of Oblivion from scratch in Skyrim's Creation Engine, from every goblin and troll to every airborne bowl.

Needless to say, Skyblivion is an ambitious project, one which has been slow-burning for almost as long as Skyrim has been out. Skyblivion has been cooking in the background of the gaming world for longer than the lifecycles of most games, something that can perhaps be attributed to the unusually long shelf life of Skyrim, in turn owing to a combination of support by developer Bethesda and the dedicated modding scene.

If the trailer is any indication, the extended development cycle was put to good use. Considering both games are now more than a decade old, longtime Elder Scrolls fans may feel a strange pang of nostalgia seeing Oblivion enemies using Skyrim skeletons and animations.

The creators have also taken some artistic license in their rendition of the game's world instead of simply making an exact replica of the game. For example, Imperial legionnaires can be seen sporting armor which leans more heavily into the Roman-inspired aesthetic which was emphasized in Skyrim, as opposed to the duller metal look originally used in Oblivion.

Perhaps the most striking part of the trailer is the reveal of the main antagonist, Mehrunes Dagon's, updated look, along with our glimpse into the eponymous realm of Oblivion, promising players a nostalgic retread of one of the Xbox 360's classic launch titles.

would be super cool to play this when it's released

Dang that's a wait ! But should be worth it then

Frog Wow, I've never even heard of this project... sounds incredible.
I'd love to play it, I never finish Oblivion as I was late to the party and it was just a bit too outdated for me when I was playing it.

Dude we're in the same boat, tried oblivion finally when it came to I think it was gamepass or maybe games with gold and got a decent way through but just couldn't do it lol the graphics were too bad, but I've went this long without being spoiled so I've been following this project lol

Wow, I've never even heard of this project... sounds incredible.
I'd love to play it, I never finish Oblivion as I was late to the party and it was just a bit too outdated for me when I was playing it.