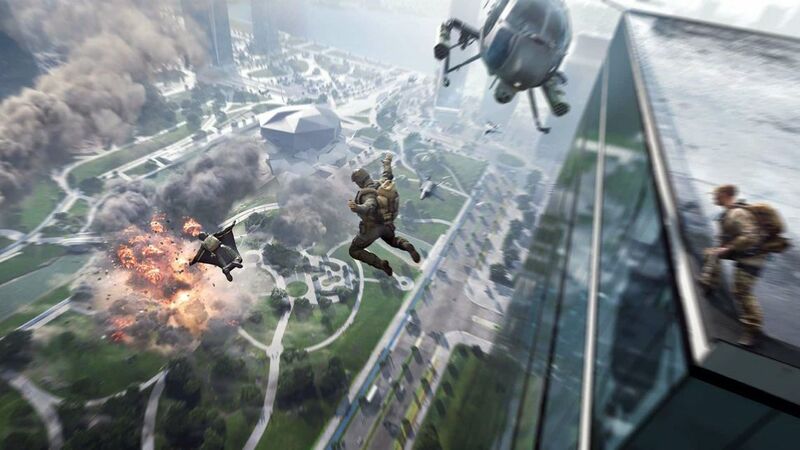 4
A Battlefield 2042 player posted a video showing a cinematic one shot kill on a tank from midair. They were parachuting on to the battlefield and managed to land a shot with their Battlefield 2042 recoilless M5 on the enemy.

The Battlefield series is well known for its combined arms gameplay, with players being able to fight on foot, in various ground vehicles, and even helicopters and jets. Battlefield 2042 is no different, and with tanks being able to deal devastating damage using their main cannons, it's only fair that infantry can use anti-tank weapons to deal some damage back. Of course, some Battlefield 2042 players are skilled enough to steal enemy tanks, but for most players, the best way to take care of an enemy tank is to blow it up with an anti-tank weapon.

In a video posted to the Battlefront subreddit, player MihneaCucu showed off their midair marksmanship skills. The video starts with MihneaCucu falling through the air with their parachute, and surveying the chaotic battle going on beneath them. They take a few shots from the ground, then spot a target of opportunity. MihneaCucu pulls out their recoilless rifle and aims down the sights, honing in on the enemy tank. They fire, and their rocket impacts the tank and kills it in one shot. As the video ends, they take a few more shots, but seem to survive. Some Battlefield 2042 players have been using rockets as anti-sniper weapons, but they still work well against tanks too.


It's important to ensure that anti-tank weapons are one of the most effective options for infantry to tank down armored vehicles with, since Battlefield 2042's sniper rifles were better at tank killing than rocket launchers at one point in the game's lifespan.

The tank operator in this clip was probably frustrated at being killed out of what seemed like nowhere. It's almost like some sort of karma though, since it's relatively easy for tanks to immediately instakill players in Battlefield 2042. Being able to quickly take down an armored vehicle is important for the balance of the game, otherwise it could skew the battleground too far in favor of the side with the most tanks. But, of course, it's important that tank operators get to indulge in driving a—nearly—unstoppable weapon of war.

"Battlefield 2042 Player Gets an Awesome Midair One Shot Kill on a Tank" :: Login/Create an Account :: 4 comments

that was certainly an amazing shot

Lord, what a shot... And yes, I have a feeling his death was cut!
Not often a news article here is a sweet gameplay clip?

Sweet clip crazy when people do stuff like this.

Sick clip always sucks when you get shit at the end