Tekken 8 is bringing back a fan favourite after 27 years 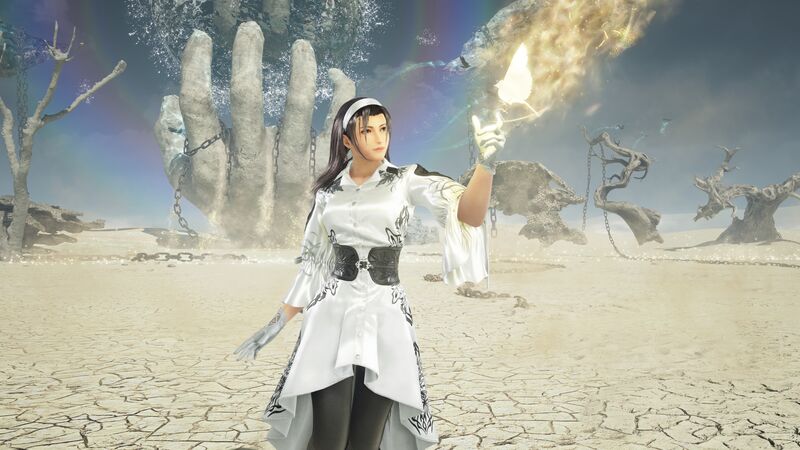 3.2
Katsuhiro "don't ask me for shit" Harada teased a banging Tekken 8 reveal at The Game Awards and that man delivered. It may have only been 83 seconds long, but we got a good look at some upcoming characters and the return of one particular favourite for their first major canonical appearance in 27 years.

Tekken 8 is going hard on the ongoing tumultuous relationship between Jin and his father Kazuya and the havoc wreaked by the clash between the Kazama and Mishima bloodlines. We're greeted by a very gruff-looking Paul who's either run out of hairspray or finally grown his hair too long, flopping over his forehead with a beard to boot. The trailer also offers very brief glimpses of a frighteningly veiny, buffer-than-ever Law along with King, Lars and Jack-8.

The most exciting part of the trailer, though, were the flashes of long-forgotten (at least by Bandai Namco) fighter Jun Kazama. The mother of Jin, she made her debut back in 1995's Tekken 2 before vanishing from the mainline roster for the next two-and-a-half decades. She's made cameo appearances in subsequent games and turned up as a playable character in both Tekken Tag Tournaments, but Tekken 8 marks her first canon appearance as a playable character since her original debut. Even including her spinoffs, it's been close to 10 years since she was a playable character.


Her appearance has left the Tekken community hyped as hell around her return, and there's a good chance she'll play a key role in finally sorting out all this daft fighting between her son and the father of her child. Her return seems to be the main talking point right now, and considering her lengthy absence I'm not surprised.

The trailer also showed off some more Rage Arts moves, which are returning from Tekken 7. The whole thing is a bombastic visual showcase, one which left many of the game's pros wowed. Super Akouma tweeted "TEKKEN 8 LOOKS SO GOOD," while Cuddle_Core said the trailer "looked great" and praised the colours and visuals.

Not everyone was so convinced, however. UK player JoKa remained reserved but "optimistic" about the gameplay side of things after a Famitsu interview with Harada emphasised Tekken 8's shift towards a more aggressive playstyle. Korean player Knee questioned the graphics of the second trailer, saying they looked noticeably worse than the first reveal. "The first trailer for Tekken 8 said 'in-game graphics,'" he tweeted. "So, was that real? I thought so, but looking at the second trailer, I don't think it's as good as the first."

Regardless of the trailer dividing some players, the hype seems well and truly here for the next battle. Between this and Street Fighter 6 it's a damn good time to be part of the FGC right now. I've always favoured Tekken and 3D fighters in general so I'm hyped to get my hands on it, though we're still without a release date. The only thing I need now is for Bandai Namco to finally unveil SoulCalibur 7. Please, I'm begging you.

"Tekken 8 is bringing back a fan favourite after 27 years" :: Login/Create an Account :: 3 comments

I loved Jun Kazama, glad they're bringing her back

Why soo damn long !? Lol that's sweet tho. Negan is pry my fav charter though now in Tekken lol