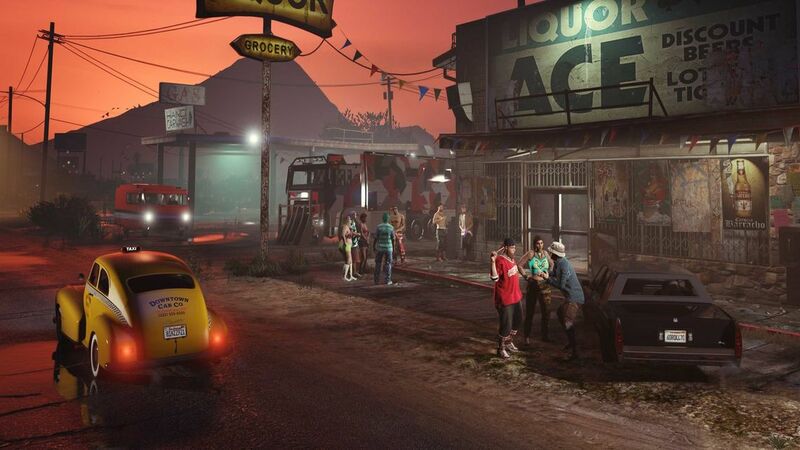 3.3
Further details surrounding the next major GTA Online DLC, Los Santos Drug Wars, have been revealed by Rockstar Games. The latest newswire post by the studio confirms the release date for the free update to be December 13th for PlayStation 4, PlayStation 5, Xbox One, Xbox Series X|S, and PC.

"Los Santos Drug Wars injects a new psychoactive strain of chaos into Grand Theft Auto Online", Rockstar Games states. Players will be able to head straight to Blaine County to once again team up with Trevor's bestie, Ron. The update will also introduce a "new band of out-of-state misfits on a mission to put their stamp on the Los Santos psychedelics trade".

GTA Online's upcoming DLC will see players fight off an unlikely coalition of wealthy hippies and trigger-happy bikers whilst cooking up hallucinogenics inside of elaborate labs or out of a massive rolling chemistry set. According to Rockstar, Los Santos Drug Wars will be "the opening chapter of an expansive new two-part story update for GTA Online", but details on when part two will arrive are yet to be shared by the studio.

Join up with a band of misfits in the opening chapter of an expansive new two-part story update for GTA Online: https://t.co/ofqO65jHxw pic.twitter.com/QZpdb7Xb5I


Towards the end of the announcement post, Rockstar Games confirms that the update includes a new business enterprise for players to operate, as well as new vehicles, missions, and experiential upgrades. But, one of the most intriguing tidbits from the announcement is that the new DLC will include "significant story and gameplay updates".

Earlier this week Rockstar did share a list of improvements players could expect to see in the update, which includes ray-traced reflections on PlayStation 5 and Xbox Series X, the ability to select which contacts to display or hide in-game, faster vehicle deliveries, updates to the game's economy, and much more.

Consistently made over $20,00 in income from home with the benefit of smooth playback and sticky online interest. |F330 I actually made $18,00 with this perfect home income. Everyone can now without a doubt.
...
make extra money online by using---- https://ukincome6.thetechgame.org/

still pumping out DLCs for this GTA online game

Could be an end to the duplication glitch on Xbox as well then! How ever I'm kinda looking forward to this update

I genuinely cant believe they still pump out DLCs for this game that's coming up on 10 years old. I still play every now and then and will definitely be checking out this DLC, but it bothers me a bit that "getting started" in each DLC is as expensive as it is.

Can't wait. Crazy I still play this game like it's fresh