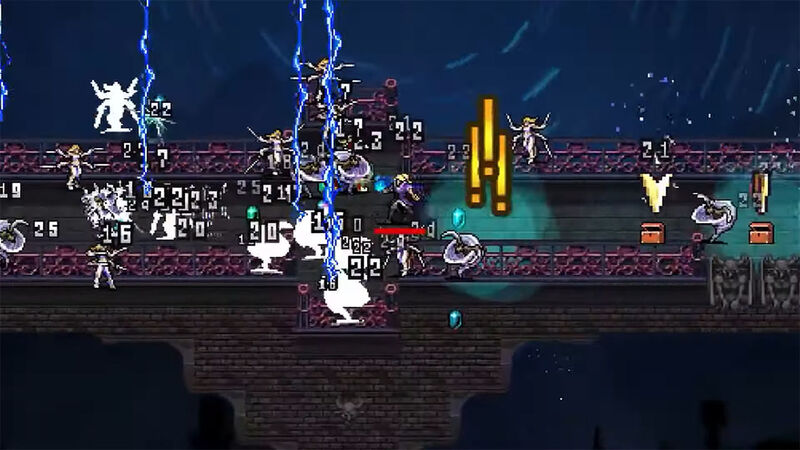 4.4
One of the year's breakout indie success stories, Vampire Survivors, recently received its first post-launch patch, as reported by Hold to Reset. While the developer, poncle, insists that this is "The Tiny One", patch 1.1 still adds a new challenge stage, a new secret character, a new powerup, and two more achievements. While the game was in Early Access earlier this year, a constant stream of new additions were made on a near monthly basis, and the latest patch continues this trend even post-release.

Available in the recently released patch 1.1 is the new challenge stage, Hyper Tiny Bridge. Unlocked by reaching level 80 in the Inverse Gallo Tower stage, Tiny Bridge is unique due to the movement restrictions imposed by the titular tiny bridge. Players can only move left or right, with no vertical movement possible. Adding to the chaos are random lightning strikes that will hit the bridge similarly to the lightning ring power up.

The random lightning ties into the latest Vampire Survivors hidden character, Scorej Oni, whom can be unlocked only through playing Hyper Tiny Bridge. The cryptic clue to unlock the new character is "discover the source of the roaring thunder and defeat the boss." Once unlocked, players can use Scorej Oni on any of the game's stages. Unique to Scorej Oni is a passive ability that grants a free lightning ring power up every eight levels, up to six ranks. The special lightning ring fires additional times when the character is losing health, giving the opportunity for unique builds to maximize the lightning's potential.

In addition to a new stage and a new character, a new powerup designed for experienced players has been added to the expansive armory. Accessible from the collection menu, Seal allows gamers to banish an item from level-up choices during a run. With 10 purchasable levels, Seal gives the option for customized runs that are optimized for a particular build. In order to unlock Seal, players must first banish 10 or more weapons during a single run.

Finally, additional achievements have been added to the existing 140. Unlocking Hyper Tiny Bridge and Seal will reward a new achievement for each task. Grouped as "DLC Pack 1", the two achievements add 15 Gamerscore to Vampire Survivors, giving gamers the opportunity to earn a total of 1,215 Gamerscore in total for earning all 142 achievements.

can't imagine playing this game more than a hour tbh